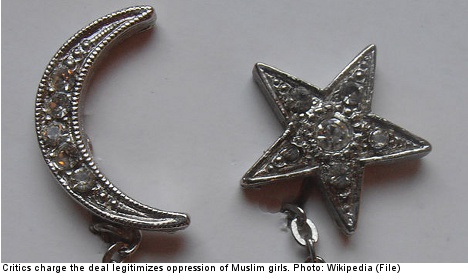 “My first reaction after reading was total shock: how can schools so casually force children into more segregation and social exclusion?” women’s and equal rights activist Bahareh Andersson wrote on the Swedish opinion website Newsmill.

Her comments came in response to reading a document outlining an agreement between education officials in Jönköping municipality and local Muslim groups ensuring special treatment for Muslim children enrolled in area schools.

“It’s not only about exceptions for food, but it’s also about an exception from human rights. Children learning from an early age that gender segregation is something natural and that love without marriage is a sin and immoral,” wrote Andersson.

“Why do people want immigrant children to be indoctrinated with values from the Middle Ages?”

According to the group, the school district’s agreement amounts an unauthorized exercise of control over the affected students as well as a limitation on their life choices.

The five page document outlining the agreement was first drawn up in 1994 and has been revised periodically over the years.

The most recent revisions – carried out in June 2011 – involved how schools should deal with Ramadan and other details surrounding how religious holidays would be treated in local schools.

According to current head of Jönköping’s education administration Stephan Rapp, the document’s seven main points have remained essentially the same since they were first drawn up.

Among other things, the document includes guidance ensuring that schools will allow Muslim girls to shower in their underwear following physical education classes and that students would be allowed to skip out on study visits of class trips that involve overnight stays.

According to the agreement, students fasting for Ramadan are also exempt from attending physical education classes and representatives from local Muslim congregations are also granted access to the school’s kitchen to observe how the school’s food is prepared.

Rapp admitted to the TT news agency that the conditions outlined in the document could be sees as providing special treatment for Muslim students.

“Yes, and we take that very seriously,” he said, adding that city education officials plan on reviewing the document at a meeting next week.

“That could lead to anything from changes to that it is scrapped.”

Rapp emphasized that the agreement would be reviewed “closely” to ensure it complies with Swedish law.

Nor was he aware of other similar agreements in other municipalities.

Meanwhile, GAPF, along with other groups, have reported the matter to national education authorities in Sweden, arguing that the agreement legitimizes violence, oppression and control over Muslim children.

“Schools have often given these children a little breathing room. We meet children who say that at school the can relax and take a breath. There isn’t a dad, cousin, or brother running around in the halls and controlling them,” Sara Mohammad, chair of GAPF, told TT.

“School should be a neutral environment where they avoid being controlled. Children aren’t born with religious values, rather it is parents’ traditional convictions that are forced on the children. Schools and municipalities shouldn’t contribute to that.”

Mohammad added that she also plans to report Jönköping municipality to the police for professional misconduct.

GAPF is also looking into whether there are similar agreements in other municipalities.