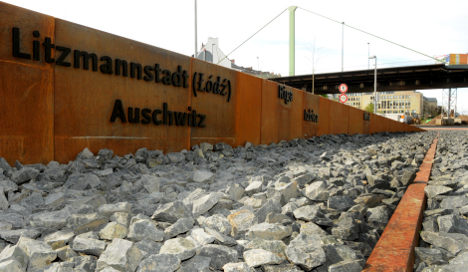 Police captain and SS member Wilhelm Meurin was responsible for guarding the deportation train which left Düsseldorf on November 14, 1941 in freezing temperatures, and travelled east for four days.

He said that although 300 of the people on the train were no longer capable of walking, “the unloading in Minsk could be conducted at the desired speed.”

He also reported that 8,000 Russian Jews had already been “removed and… shot” from the Minsk ghetto.

His transport report showed that the horrendous conditions included temperatures of -18 degrees Celsius along the 96-hour journey from Düsseldorf to Minsk.

The train carried 992 Jews, forced to stand in the wagons as they were crammed in so tightly. Not only had the heating long packed in, there was no water after the Russian border, the report recorded.

“The Jews were at this time pretty soft,” Meurin wrote of their condition in his seven-page report.

And although he dutifully recorded every stop along the long route to the concentration camp, there was little more about the condition of the formerly German citizens in the train. His men, in contrast, were “fresh and unchangingly zealous,” with none reporting sick.

He was also detailed about his trip home, which he said he had to take in a third-class carriage, and that the alcohol ration handed to him for the journey was not enough. He also said that ear muffs would be welcome for his officers on such duties in the future.

German historian Bastian Fleermann found the report while conducting an online search in the Wiener Library for the study of the Holocaust and Genocide in London.

“It was a purely accidental find,” he said, adding he had simply put the search terms “Düsseldorf” and “Minsk” into the archive’s online research service. “We do not know how it got into this London archive,” he said.

Düsseldorf’s Derendorf station, from where the train left, is now the site of a memorial to the people who were deported from there.