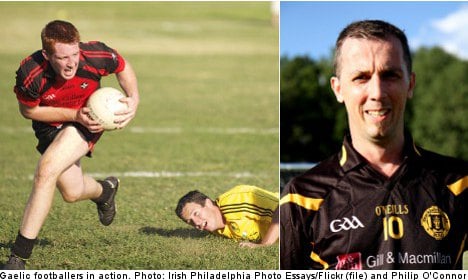 “There’s a definite upswing in the numbers of Irish coming to Sweden – the Malmö and Gothenburg teams are travelling in numbers, and the Stockholm Gaels will be fielding two teams for the first time,” says Gaels’ chair Philip O’Connor.

O’Connor, an Irishman with some 13 years in Sweden under his belt, is responsible for creating the Stockholm Gaels team. He is also the author of a best-selling book, with “A Parish Far From Home” hitting book stores last year, an insight into the sport and the Irish community in Sweden.

He points out that Sweden’s Irish community has changed its face over the years, and that this is reflected on the field.

“The Irish community here used to be mainly people working for big companies like Ericsson, but now we have everything from tradesmen and artists to students representing us.”

“With taxes in Ireland being raised, spending slashed and education becoming more expensive, Irish people – especially those with partners from here – are starting to see the sense in moving to Scandinavia, for a few years at least.”

Best described as a spectacular mix of soccer and Olympic handball, Gaelic football is the most popular field sport in Ireland, attracting tens of thousands of spectators every weekend.

Led by Gothenburg and Copenhagen, Scandinavian Gaelic football started about ten years ago and has achieved explosive growth in the last few years.

But he is quick to point out that the sport is not just an Irish phenomenon.

“We have players from all over the world, and our women’s team contains a large number of Swedish girls. They really dig the physical nature of the game, as well as the camaraderie in the club”.

There are now seven clubs in the region (Stockholm, Gothenburg, Malmö, Oslo, Copenhagen, Helsinki and Tallinn) and the annual championship is one of the most well-known and competitive outside of Ireland.

Though no strangers to playing in the rain, the players are hoping for fine weather at players hit the fields at Gärdet Sportfält near Östermalm in Stockholm next weekend.

“Our last tournament at Årstafältet last August almost got washed away. They players don’t care, but it wasn’t too comfortable for the hundreds of spectators,” O’Connor explains.

Defending champions Stockholm will be hoping for a good start to the season, and are looking forward to getting a lot of support from the locals.

“Well, we had almost 1,000 people in this year’s St. Patrick’s Day parade, so with a bit of sunshine, we would expect several hundred to turn out. Our sponsors from the Dubliner will have a tent serving food and drinks, and there will be family activities from 1300. The group games will be played all through the day, with the finals starting at around 1600,” O’Connor says.