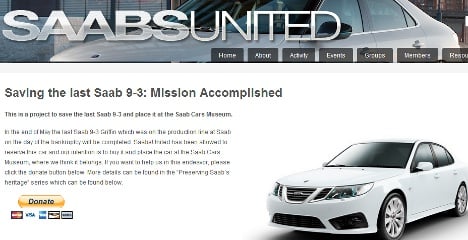 The Saab United blog launched the funding drive in a bid to assemble the more than 200,000 kronor ($29,330) required to purchase the vehicle.

“We, the fans set out on a mission to buy a car, and not just any car, we set out to buy the last of a production series, the last Saab 9-3 Griffin,” a post on the Saabs United blog on Friday explained.

“And we have done it. Today we passed the amount required.”

More than 600 diehard Saab fans have assisted in the collection of the money which will be duly converted to Swedish kronor and transferred to a Swedish bank in order to pay the invoice from ANA, the firm responsible for selling the vehicle.

The Saab 9-3 will however not be destined for a life on the open road and will in due course be donated to the Saab Museum in Trollhättan.

Saabs United stated that the donations page on their website will be kept open for a “little while longer” promising to donate any extra money left over after the purchase of the car to the Saab Museum.

Saabs United was begun in February 2005 and was previously owned by Steven Wade, an Australian who later secured a post at the Swedish firm after the takeover by Spyker. It has since been taken over by Tim Rokka.

Saab Automobile petitioned for bankruptcy in the Swedish courts in December 2011 following the failure of a Chinese consortium to complete a takeover.

India’s Mahindra and Mahindra, and China’s Youngman, are the latest Asian firms to be linked with a prospective buyout of the loss-making Swedish firm.