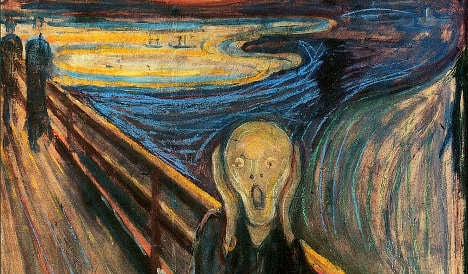 Heated competition between seven bidders took the price to the highest for a work of art at a public auction in just 12 minutes, sparking applause.

"The Scream" is one of four versions of a work whose nightmarish central figure and lurid, swirling colors symbolized the existential angst and despair of the modern age.

It was sold by Norwegian Petter Olsen, whose father was a friend and supporter of the artist. He plans to establish a new museum in Norway.

On two occasions, other versions of the painting have been stolen from museums, although both were recovered. Copies have adorned everything from student dorms to tea mugs and the work has the rare quality of being known to art experts and the general public alike.

"We're delighted to say that this magnificent picture, which is not only one of the seminal images of our history, but also one of the visual keys for modern consciousness, achieved a world record," Simon Shaw, head of the Impressionist and modern department at Sotheby's, said.

Reflecting the excitement, Sotheby's spokesman Darrell Rocha said there had been an "electric" atmosphere during the sale of a painting that had been estimated to fetch at least $80 million.

"A group of seven bidders jumped into the competition early, but it was a prolonged battle between two highly determined phone bidders that carried the final selling price to its historic level," he said.

"Scream's" success means there are just three other works that have sold for more than $100 million.

The version of "The Scream" sold on Wednesday was executed in 1895 and is the only one not held by Norwegian museums. It also features a poem inscribed by Munch in which he explains his inspiration for the work, which depicts "the great scream in nature."

Olsen said he was "very pleased" and said he hoped "the publicity given by this sale will increase interest in Munch's work and awareness of the important message that I feel it conveys."

"The scream shows for me the horrifying moment when man realizes his impact on nature and the irreversible changes that he has initiated, making the planet increasingly inhabitable."

The sale was the high point of the auction of Impressionist and modern works at Sotheby's. Rival Christie's held a more muted auction Tuesday.

Both houses turn to contemporary art next week, with Mark Rothko's 1961 painting "Orange, Red, Yellow" expected to sell for $35 million to $45 million at Christie's.