Copenhagen has been part of the EPT since the tour opened in 2005, but the Danish capital has been cut for the ninth season.

The current season – which is just finishing up with the Grand Final in Monte Carlo – contained 13 events including Copenhagen, but EPT season 9 will only feature eight stops.

The organizers’ aim is that each stop on the EPT should have a festival feeling to it, with lots of side events and special promotions. Each stop on the tour will be around ten days long.

Except for the PokerStars Caribbbean Adventure, which will cost $10,000 to play in, the standard buy-in for the EPT Main Events will still be €5,000. Season 9 will kick off with EPT Barcelona in August.

EPT Copenhagen has for the last few years been considered as the biggest and most prestigious poker tournament in the Nordic region.

Sweden has had great success in Copenhagen with three Main Event wins, lots of final table appearances and several side event victories. But as of next season the Swedish tournament specialists will have to try their luck somewhere else.

This is the schedule for EPT season 9: 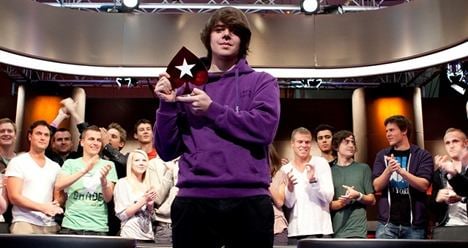 High Stakes Players are the most fascinating to watch for the average amateur player. While you might be sitting at home grinding away at 1c/2c tables, these guys play for money you would never dare to risk (partly because you don’t have it). The highest games running online these days have Blinds of $200/$400.

A single pot can easily amount to the value of a middle class car, and within a week, some players win or lose as much as a house.

The two Germans who fared badly last week are called Tsubasa Manabe and Benny Spindler. Manabe, who plays under the nick Tsubi87, has been a regular online player since 2007. He is sponsored by German poker school PokerStrategy, where he became a Black Member in early 2011.

His family originates from Japan, but he grew up in Bensheim, Hessen, and speaks fluent German. Over his whole career, he has made around $500,000 profit with online poker, but last week that dwindled to a mere $180,000 within only a couple of days. Manabe lost $313,000 and was thus the biggest loser in online poker last week.

A lot better known, mainly because of his formidable success in live poker tournaments, is “Psycho”Benny Spindler. Spindler emerged on the live poker stage with a 3rd place in the $9700 PCA main event 2009, where he reached third place and won over a million dollars.

His nickname is no accident, as he is infamous for his hyper-aggressive, forward playing style.

He went on to make several final tables in large international events, and went on to win the English leg of this year’s EPT season for another $1,2 million. On the whole, he has over three million dollars in live poker winnings.

Online though, where he is better known under his nick toweliestar, nothing seems to go his way this year. Last week alone, he lost $220k playing his favourite game No Limit Hold’em. Over the course of 2012, his losses now amount to more than $700k.

It’s the worst run the German MTT specialist has ever had in his career. Although the presence seems to look bleak for Spindler, if he can’t turn things around online, there is some light at the end of the tunnel.

It’s only two weeks until the World Series of Poker begins, and that means a series of almost 60 live MTTs. More than enough chances for “Psycho”-Benny to make up for his online downswing of the last couple of months.

The World Series of Poker takes place every year in Las Vegas. The main attraction always is the $10.000 main event, but this year it will also feature the Poker Players Championship with $50.000 Byu-in as well as the biggest buy-in tournament ever: “The Big One”, as it’s called, will cost you a cool million to play in. That’s real dollars, not Facebook chips.