The Swiss city’s official May 1 celebrations unfolded peacefully, but some 20 people, mostly youths clad in hoods, clashed with police later in the day.

Some 100 riot police blocked off part of the city centre and arrested several people as hundreds of onlookers took to balconies overlooking the streets to watch, an AFP correspondent said.

The clashes went on throughout the afternoon. Zurich police told AFP they did not yet have an estimate on damages.

The annual May Day rally drew some 12,000 people, police said. 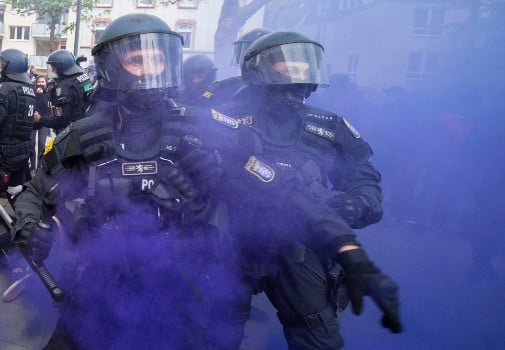 Police at a protest in Frankfurt on Saturday. Photo: Boris Roessler/dpa

Several arrests were made in Berlin on Saturday evening after violent scenes at a demonstration in the Neukölln district that was attended by up to 10,000 people.

Protesters threw stones and bottles at the police ranks, or dragged rubbish bins and pallets onto the street before setting them on fire.

Some 5,600 officers patrolled the streets of the capital on Saturday during demonstrations on Labour Day, which has a history of violence in Berlin.

Protest organizers have accused the police of beating demonstrators for no reason.

The protest was ended after its organizer was himself was attacked by the crowd, the police have stated.

Berlin Social Democrat politician Tom Schreiber tweeted that left-wing and right-wing extremists are “enemies of democracy” who don’t care about Covid-19. Both stand for hatred and violence against police officers, he said.

By midnight, the situation in Berlin had largely calmed down. There were still small fires here and there but no more major “operational events,” police reported.

But after the city’s 10pm curfew, numerous people were still out and about in the central Kreuzberg district, while crowds fathered in Mauerpark in the north of the city to listen to music.

The aftermath of a violent demonstration in Berlin on Saturday evening. Photo: Annette Riedl/dpa

The demonstrations during the day were peaceful, police said.

About 10,000 cyclists rode through the wealthy Grunewald district on Saturday afternoon to demonstrate against housing policy and rising rents.

At a gathering of about 200 opponents of lockdown measures in Berlin-Lichtenberg, the police filed charges against several dozen people who were not wearing face masks.

Disruptions in other cities

In Frankfurt, another far-left demonstration called “day of rage” descended into violence, with police using water cannon against the demonstrators.

Two protesters needed treatment from medical teams while several police officers were also reported to have been injured.

In Hamburg, police used water cannons to disperse an unauthorized demonstration that had formed in the Schanzen district. Throughout the night they were involved in isolated operations against black-clad anarchists.