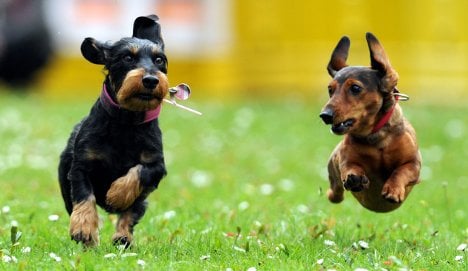 She was planning to do what? Photo: DPA

The performance, entitled “Death as Metamorphosis,” was to take place next week in a small theatre in the Spandau district of Berlin. Accompanied by funeral music and a gong, the artist was going to strangle two puppies with cable ties after a brief meditation.

According to a report in the Berliner Morgenpost newspaper, the provocative piece was meant to highlight the plight of sled dogs in Alaska and hunting dogs in Spain, which are said to be killed in the same way once they can no longer work.

The Berlin administrative court stopped the show from going ahead on Friday, saying that animal protection laws forbid an animal from being harmed in any way in a show. The artist had argued that Germany’s constitution “unconditionally guarantees artistic freedom.”

The report appeared in the same week as a controversial project by two art students at Berlin’s University of the Arts (UdK). Students Iman Rezai and Rouven Materne are threatening to guillotine a sheep on camera, depending on the results of an online vote.

The experiment is meant to stimulate debate on humanity and democracy. Materne said the guillotine was chosen because “it represents a society that wants to give its cruelties the appearance of humanity.”

“The anonymity of the internet lures the perversity out of some people,” the 23-year-old explained. The artists are planning to ignore the protests and reveal the results of the vote in an exhibition in mid-May.