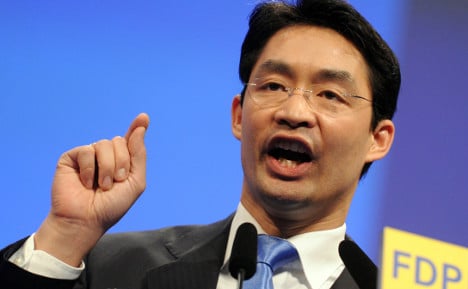 “We meet in stormy times,” FDP leader and German Economics Minister Phillipp Rösler told party members gathered in Karlsruhe on Saturday, as he appealed to fellow liberals to pull together and show a united front.

“Just where the Zeitgeist continues to migrate to the left, we as the FDP are indispensable. As the force of freedom, as the force of the middle ground,” he continued.

“If we don’t do it, no one will fight for freedom. That’s why we need a liberal party in Germany,” he said, reminding the party of their core value.

In fighting language, Rösler went on to dismiss the other main parties for their lack of commitment to freedom, including the FDP’s coalition partners Chancellor Angela Merkel’s Christian Democrats which he said had grown to “mistrust freedom.”

“The left party will always be an enemy of freedom,” he said, whilst the Greens he dismissed as “intolerant zealots” who only existed to forbid things, endangering the “growth chances of a whole society.”

The Pirates, who represent a growing threat to the FDP’s existence, he dismissed as “a left-wing party with internet access” who see politics as no more than “a free download.”

Rösler also defended his new strategy to rebrand his party as “the party of growth.” The main opposition Social Democrat party just wanted to throw money at the problem, he said, whereas the FDP are committed to cleaning up the budget.

The FDP’s future is in the balance, with the party performing dismally in recent national opinion polls – hovering around the two percent mark. The next test will be the upcoming state elections in North Rhine-Westphalia on May 13.

If these numbers are anything to go by, the FDP is likely to be kicked out of the ruling coalition at next year’s federal election, forcing Chancellor Merkel to seek another partner in order to stay in power.