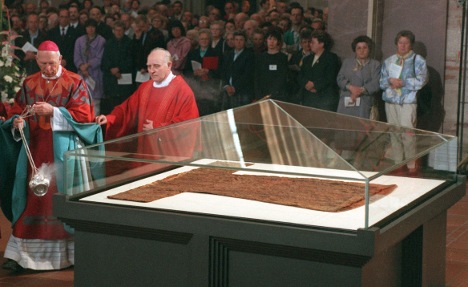 This is the first time for 16 years that the garment has been put on public show – this year marks the 500th anniversary of the first time it was shown, Judith Rott, a spokeswoman for the event told The Local.

Silvia Calderón Avila, a Bolivian nun, is a pilgrim who has travelled further than most to view the garment.

“For me it’s a big religious experience,” she said. For Robert Brancheau from Orlando, Florida in the US, the event is interesting “for historical reasons.”

Trier-based artist Helmut Schwickerath will again be displaying his alter housing the “holy underwear” of Karl Marx, Trier’s most famous son. Schwickerath says the long john display is intended as a provocative opposite to the Jesus tunic.

Trier’s old town centre is decked out with flags and the pilgrimage’s red and white garment logo. Hazelnut branches painted in bright colours adorn the square surrounding the town’s cathedral.

Meanwhile, Trier’s mayor, Klaus Jensen, is happy about the publicity Germany’s oldest city is getting from the pilgrimage.

And local businesses are pleased too. Uwe Bonnemann, the owner of a sweet shop near the cathedral, has concocted candles, chocolates and pralines with the holy garment motive.