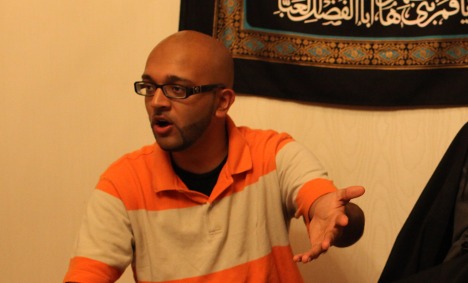 Aman Ali, a New Yorker of Indian heritage, said stopping at a different Mosque on each day of 2010’s holy month of Ramadan had given him a broad outlook on how Muslims were living in America.

His current tour – he has just performed in Copenhagen and is heading for Germany next week – was showing him interesting things about the differences between Muslim life on either side of the Atlantic.

“The big difference is that the American culture is one of immigration, it is very easy to immigrate and integrate,” he told The Local ahead of bringing his show “30 Mosques in 30 Days” to Germany.

“In Europe national identity is different. You go to parts of Europe and identity is more defined, like in Germany, Denmark, Sweden or Norway.

“Although, I was in the UK recently, and people are very open – and the favourite national dish is chicken tikka masala.”

He said the biggest eye-opener was that the idea that people were against or scared of Muslims was mostly simply not true.

“There is this illusion that there is opposition to Muslims, and Muslims think that everyone hates us. But in reality most people don’t care,” he said.

“I see people living peacefully and working closely together with their neighbours. In Europe perhaps not so much, but this is not necessarily due to racism. I think it is more to do with ignorance – if everyone comes from the same kind of background, they can end up ignorant of other backgrounds.”

This can lead to Muslims not making much of an effort to integrate, he said. “They then want to create a mini Somalia or Morocco or something,” he said.

“There is no problem with holding onto your own culture, but why not build Mosques that are Muslim and German in style? It is frustrating, these cultural bubbles, that is what generates a lot of the tension.

“We have our share of problems too, there is a lot cynicism, the feeling that things are getting worse and everyone hates us.”

He is happy to describe his show as stand-up story-telling – emphatically not a lecture.

“I want to create an honest dialogue. I just tell stories that I have heard along the way.”

Berlin, where his show is scheduled for Monday, is a particular treat for him.

Aman Ali’s show in Berlin is on Monday at the Babylon Theatre, and in Magdeburg at the einewelt haus.