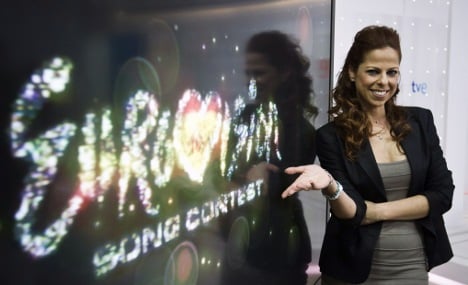 The paper said a recent news piece shown on Azerbaijani state television channel AZTV showed Frankfurt as a city of sin in revenge for German criticism of the country’s human rights record.

The voiceover describes how tramps shelter in the shadow of banks, ever-growing crowds of junkies wander the streets and women are forced to work in sex shops – while pictures were shown of the seedy district around the city’s train station and the “Occupy” protest camp outside the European Central Bank.

Relations have cooled between the two countries after criticism began appearing in German newspapers two months ago, calling on musicians and viewers to boycott the event in Baku.

Last year’s hosts Germany have played an important role in preparations for the show, which will be watched by between 115 million and 120 million people worldwide.

A scandal broke when Human Rights Watch claimed up to 20,000 people were forced out of their homes when they were demolished to make way for the venue.

And Amnesty International recently ramped up the pressure on Azerbaijan, demanding the release of all non-violent political prisoners in a social media campaign.

In response Azerbaijani state media has launched a propaganda war against its critics – including the German government’s human rights representative Markus Löning, who has repeatedly criticized Azerbaijan’s poor record on press freedom.

While accompanying German foreign Minister Guido Westerwelle on a recent visit to the country, Löning was denounced by the media as a drunkard who had had sex with a local civil rights activist, the Frankfurter Rundschau noted.

Azerbaijan – which always ranks poorly on world press freedom, corruption and democracy indices – is hoping Eurovision will boost its image abroad, pulling out all the stops to promote itself.

Mehriban Aliyeva, wife of authoritarian leader Ilcham Aliyev has even been made head of the event organising committee.

“The Azerbaijani Government has spent millions of euros on the Song Contest and wants the event to be a success,” Amnesty International’s expert on Azerbaijan Marie von Möllendorff told the paper.

The European Broadcasting Union is trying to play down the political overtones of this year’s Song Contest.

“We stand for change for the better and for fundamental democratic rights,” Jørgen Franck, Director of the TV at the EBU told the paper.

“That’s what we’re fighting for in Europe. But we don’t take an active role in that process; we leave that to others,” he said.