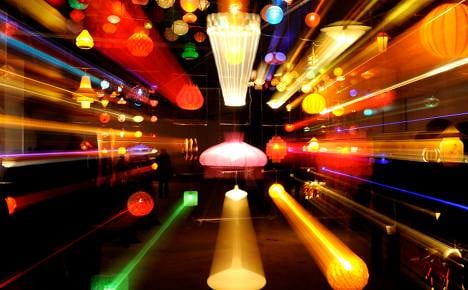 30 Mosques in 30 Days: Tales from an American Ramadan Roadtrip

Aman Ali is a Muslim storyteller and stand-up comedian from New York. A couple years ago he embarked on the great American road trip. But instead of heading for sites like Mount Rushmore and Niagara Falls, he and his buddy Bassam Tariq stopped at 30 different mosques, one for every night of Ramadan. Hear about his adventures Monday at Babylon.

Architects of the Revolution: Soviet Art and Architecture 1915-1935

One of the coolest things about the Soviets is their architecture. In the years after the Russian Revolution of 1917, artists and architects started obsessing over form, space, and texture. A new exhibition at the Martin-Gropius-Bau presents an overview of avant-garde art and architecture from the Soviet Union. See drawings and photographs of workers’ clubs, trade union houses, communal apartments, state-owned department stores, and other monumental structures like Vladimir Shukhov’s Shabolovka Radio Tower.

It has been 25 years since the Irish songstress released her seminal debut disc. Nine albums later, she’s keeping alive her message of personal strength and individuality with How About I Be Me (And You Be You). This week, Ms. O’Connor hits up three cities in Germany. Catch her Wednesday in Cologne, because nothing compares to her.

Got a budget for original art? Blow it this weekend in Cologne. About 200 galleries will be showing works from the 20th and 21st centuries at this mega annual art fair. New and emerging artists can be found among the more established. Hit up the vernissage on Tuesday and hang with the cool kids.

Toast the filmmakers Tuesday at Filmfest Dresden’s opening party. Five days of short films follow, including about 70 little movies from 20 countries. This year’s program features flicks based on R.E.M.’s last album, as well as a series devoted to Eastern European short films from the 1960s.

It’s a nice idea – collecting beautiful, inspiring images, gathering them together, organizing them by theme, framing them, and painting them. Gerhard Richter’s “Atlas” project began to take shape in 1964 when the Dresden-born artist first started collecting source materials. Go this week to see the Dresden State Art Collection’s exhibition, because it ends April 22.

The train station is blue, the city hall is red, and Frankfurt’s old town is awash in all the colors of the rainbow. Every two years Frankfurt becomes a city of light during Luminale, a six-day extravaganza that merges art with light. Ride the bus around the city at night and take in all the luminous splendour.

It’s springtime in Hamburg and everybody’s talking about the Arab Spring. From Egyptian films, to an evening of Arabic poetry and European piano music, and an Oriental Orthodox prayer service, Middle East Culture Weeks offers a diverse program of events centered around the Arab Spring theme. A handful of discussions with journalists and scholars focus on hot topics like freedom of religion and women in post-revolution Egypt.

The recipient of a pair of awards at the Tokyo International Film Festival where it premiered in 2010, Buddha Mountain is a film about young love and the joys and sorrows of life. See how the acclaimed Chinese director Li Yu’s cinematic romance unfurls on the big screen Friday in Hamburg.

Movies, art, and dancing, all with a Polish beat. Check out the 10 mini flicks selected for this year’s Short Waves festival in Munich then dance the night away with DJ Jonas Z. Artist and visual DJ Jarek Danilenko segues from movie time to party time with “Short Waves: ANIMIx,” an audiovisual piece that combines a video collage with live electronics.

The Irish Voice called them “the hottest traditional Irish group on the planet.” Tap your feet along to Lunasa’s sprightly melodies Wednesday at Prinzregententheater. Irish eyes will be smiling and Irish hearts will be flying.