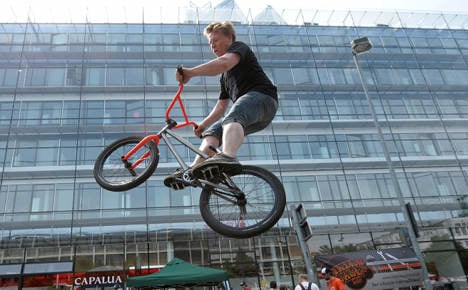 Peter Ramsauer, of the Christian Social Union, told the Neue Osnabrücker Zeitung that he frequently spotted cyclists flaunting bike rules on German roads, such as zipping through red lights.

The sheer volume of law-breakers is overwhelming police, who are trying to “curb crazed cyclists once and for all,” said Ramsauer.

But national German cycling association the ADFC hit back at this statement.

While red light-skipping cyclists were common, Roland Huhn, a lawyer for the ADFC, said Tuesday that the numbers were in no way comparable to those of speeding drivers and he could not name a single “aggressive” cyclist.

Ramsauer has been pushing for a mandatory helmet law since late 2011, when he said he could only imagine helmet use remaining voluntary if German cyclists started to ride more responsibly.

The number of cyclists who wear a helmet has climbed slightly over the past few years, with 11 percent of the population now wear helmets when they saddle-up. In 2010, this figure was just nine percent.

The highest increase was among children between the ages six and 10. That percentage jumped from 38 percent in 2010 to 56 percent in 2011.

Ramsauer told the paper he hoped the overall number of people wearing a helmet would increase to nearer 50 percent over the next few years.