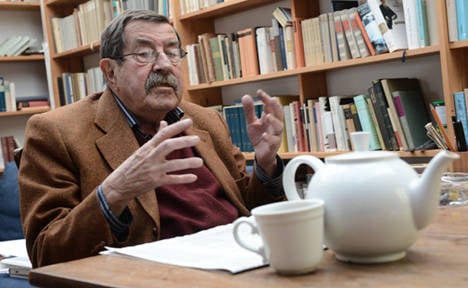 The poem said that Iran was in danger of a preventative nuclear attack from Israel which had the potential to wipe out the Iranian people and that this endangered world peace.

Commentaries about anti-Semitism and artistic license flooded the media over the Easter weekend, and while Iran piled accolades onto the 84-year-old, many denounced him.

The argument has become so tangled, that one Israeli author wrote in the Süddeutsche Zeitung on Monday that it would be anti-Semitic to not allow a German to criticise Israel.

“Israel wants to be treated like any other country,” said Uri Avnery. “Any approach that suggests Israel receive special treatment is anti-Semitic.”

And while other Jewish academics agreed that criticism of Israel should be allowed, they were more interested in the role of art in politics.

“It is not politician’s place to complain about artistic work and use it as justification to abuse the enforcement of political power,” said Mosche Zimmermann, a lecturer at the Hebrew University of Jerusalem, in a guest commentary for news magazine Spiegel.

He opened on the idea that banning Grass from Israel was not only “absurd” but an empty gesture as Grass was unlikely at his age to be visiting the country and has not since he was pelted with tomatoes there 40 years ago.

The bond between art and politics was also a hot topic in the regional press. A commentary in the Flensburger Tageblatt suggested that people should not take Grass so seriously, and that he could be ignored as easily as he could be criticised.

“There is no duty to recognise the Nobel prize winner as a ‘moral authority’. His poem was just the concoction of a left-wing intellectual busybody,” the piece read.

The Stuttgarter Zeitung was similarly unforgiving, calling Grass “not only a moral failure but an intellectual one.” Germany encourages intellectuals to comment in political discourse to give an open-minded view and Grass did not deliver.

A commentary from left-leaning taz newspaper was more positive, reasoning that Grass had “the right motive but the wrong tone,” and that warning about Iran’s military power a legitimate topic but it was executed with “a lot of ego and little sobriety.”

The Saarbrücker Zeitung said the conflict in the Middle East was a global issue that affected everyone, and so Grass too had a right to share his opinion.

“His warning shot may have backfired now, but only time will tell just how absurd his fears actually are,” the commentary read.