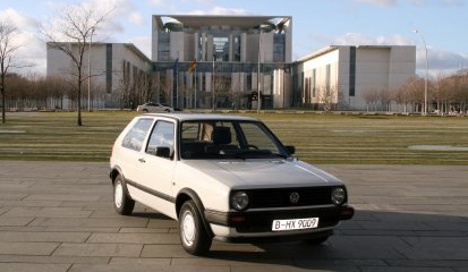 The Ebay ad cheekily includes a number of photos of the car parked outside the Berlin Chancellery as well as the registration document from September 1990 complete with Merkel’s name and her then address in the Prenzlauer Berg area of Berlin.

Weekly magazine Der Spiegel reported on Friday that when the seller bought the car about a year ago, it had accident damage, and he decided to do it up when he realised the identity of the previous owner.

He fitted a couple of new body panels, gave it a fresh coat of paint and cleaned up the interior.

Now he is hoping to sell the car on Ebay for at least what he claims site to be the top price offered so far – €10,000.

The magazine said it was plausible that the car belonged to Merkel before – the 1990 address was right, and it is known that she drove a white Golf at that time.

Merkel recently said she had ordered an East German Trabant car before the Berlin Wall fell, but that the regime collapsed before she got it, so she bought a Golf instead.