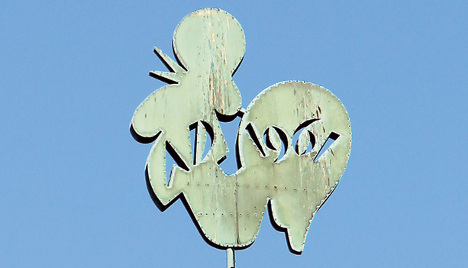 Vedin is one of the members of “The Sunday Cocks” (Söndagstupparna), a hiking club whose members are “up with the crowing cocks” every Sunday morning, enjoying ten kilometer hikes around the Hisingen region.

He claims that his club hikes past the church’s glorious cock often, and that he had put it up for nomination many times before.

Despite several previous failed attempts, Vedin decided to put it up once more this year, a decision he doesn’t regret.

The weather vane, which stands atop the Tolered Church in western Sweden, was designed and perched in 1961 by Torsten Hansson, who was the architect of the building.

The adornment is made of copper, and was built by metal smith Per-Erik Svensson.

Vedin added that another contributing factor to his decision to nominate the Hissingen church’s cock was the fact that a long-time member of the “Sunday Cocks” was a personal acquaintance of architect Hansson.

“Having that personal connection to the cock was also something extra special,” he said.

According to Swedish lifestyle magazine Land, it is a rotating cock, which when blown, spins on ball-bearings that were donated to the church by Swedish bearings’ giant SKF.

Vedin added that the “The Sunday Cocks” actually predates the church and its newly crowned cock, as the hiking club was founded in 1930 and currently has twenty-five active members.

The club is a “men-only” organization, he explained, which has taken its members on more than 2,000 hikes so far in all kinds of weather.

Women, however, are only allowed on the hikes twice a year, the First Advent and the season’s final hike in April, according to the Göteborgs-Posten (GP) newspaper.

The Cock of the Year Award has been handed out for the past 33 years in a contest co-sponsored by Land magazine, and the “Society for the Promotion of Church Cocks” (Kyrktuppsfrämjandet).

According to Christian newspaper Dagen, the Church Cock in Sweden has historically had a symbolic duty to watch out over parish residents.

They are most often found on churches belonging to the Church of Sweden.