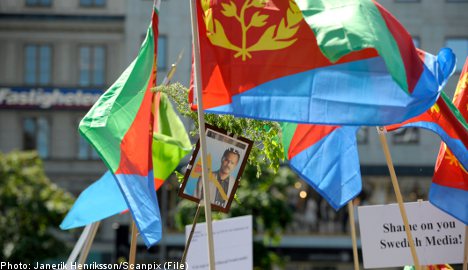 A pro-Eritrean regime demonstration in Sergels Torg in 2009

Among the guests will be President Isaias Afewerkis closest man, advisor Yemane Gebreab.

“It is bloody awful that they brainwash kids and collect them all together in Sweden to celebrate the dictatorship,” Swedish-Eritrean MP Arhe Hamednaca of the Social Democrats told news agency TT.

According to a statement from the youth organization Young People’s Front for Democracy and Justice (YPFDJ) some 800 exile Eritreans are expected to attend the meeting, which will take place in Sweden between April 5th and April 9th.

Head of information at the Swedish foreign ministry, Anders Jörle, says that the ministry has not had anything to do with arranging the Eritrean visit.

“But we do have the freedom of assembly in this country,” said Jörle to news agency TT.

However, Hamednaca thinks that allowing the meeting is taking Swedish freedom of speech and the freedom of assembly too far.

“I don’t think we would have allowed al-Qaeda to host a meeting brainwashing kids,” he said.

That the Eritrean regime supports Islamist movement al-Shabaab, the Somali branch of al-Qaeda, is common knowledge and the information has been ratified by the UN, Hamednaca opined.

“This is part of that movement. It is a terror regime,” he said adding that Sweden should never have granted Gebreab a visa.

The exact location for the event has been shrouded in mystery. While YPFDJ had booked the exclusive Stockholm night club Berns for their final party, the event was later cancelled by mutual agreement.

The move comes following several Swedish media reports accusing Berns of “taking money from a dictator” by agreeing to host the event.

“I think it’s inappropriate. If I owned a venue I wouldn’t rent it out to an organization that promoted a dictator,” Liberal Party (Folkpartiet) MP Fredrik Malm told the Expressen newspaper.

According to TT, the Eritrean organization has arranged a concert in Husby, in northern Stockholm on Saturday. The event has been advertised on a news site, known to support the regime.

But those in charge of the venue are unaware of the arrangements as the location has been booked by an individual and not in the group’s name.

And according to Kjell Lindgren of the Stockholm police, he would have been informed if the event was to be held somewhere in Stockholm County.

However, it is Swedish security service Säpo which will decide if the presidential advisor will require protection while in Sweden.

”That is always the case when we have foreign visitors who are part of a country’s regime, Säpo will take care of their protection. But the Stockholm police are of course following developments and are ready with resources, should they be needed,“ he told TT.

In Sweden there is widespread criticism against the foreign ministry as well as the government for not doing enough to get Swedish-Eritrean journalist Dawit Isaak, jailed in Eritrea for the last ten year without a trial, released.

Anders Jörle was unable to disclose whether there will be a meeting between ministry officials and representatives for the Eritrean government during their time in the country.

“But if there is a possibility to meet representatives for the Eritrean regime, the ministry will attempt to do so,” Jörle added.