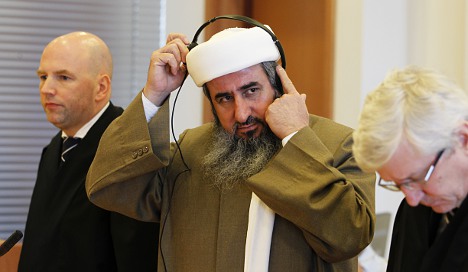 Defence attorney Geir Lippestad said the idea of calling extremists like Mullah Krekar, who founded the radical Iraqi Kurdish Islamist group Ansar al-Islam and has been sentenced to five years in prison for making death threats, was important to show that his client was not criminally insane.

An expert evaluation determined late last year that Behring Breivik was suffering from paranoid schizophrenia, but the 33-year-old far-right extremist who has confessed to killing 77 people in twin attacks last July insists he is sane.

"We have to determine if the experts who evaluated Breivik mistakenly blew off his ideas and opinions, especially about an ongoing war (between Islam and the West), as paranoid hallucinations and a psychosis," Lippestad told reporters.

"The question is to know if there are in fact groups, even small ones, in Norway who agree (with his premise). That could be important when it comes to the question of legal responsibility," he added.

Behring Breivik, who has claimed to be on a crusade against multi-culturalism and the "Muslim invasion" of Europe, wants to be declared of sane mind, according to his lawyers, so as not to damage the political message presented in his 1,500-page manifesto published online shortly before the July 22nd attacks.

During the trial, which will begin on April 16th, the defence attorneys will therefore, upon their client's request, try to prove that he is sane even though their success would entail that he be locked away in prison instead of a psychiatric institution.

On Monday, Lippestad refused to reveal the "30 to 40" names on the list of witnesses the defence plans to call, but he confirmed that Mullah Krekar was on it.

The 55-year-old mullah, who has lived in Norway since 1991, was last week sentenced to five years in prison for making death threats against, among others, a former government minister.

The far-right Norwegian blogger "Fjordman," one of Behring Breivik's mentors, will also be called to the witness stand, Lippestad said, stressing though that the defence does not intend to enable a free-flow of "political propaganda," as his client appears to wish.

"Calling witnesses from extremist milieus is important because we think that the psychiatric experts perhaps do not have the necessary knowledge" to distinguish ideological extremism from a psychiatric disorder, he said.

The defence will place a special emphasis on calling medical and psychiatric witnesses who are likely to testify that Behring Breivik is of sound mind, Lippestad said.

The psychiatric experts' conclusion last year, which if confirmed would entail that the confessed killer is locked up in a psychiatric institution instead of prison, caused outcry in Norway and an Oslo court ordered a second evaluation by two new experts, who will present their findings on April 10th.

In the end, however, it will be up to the five Oslo court judges to determine whether Behring Breivik should be considered sane when they present his verdict, probably around the middle of July.

He then went to Utøya island northwest of Oslo, and, dressed as a police officer, spent more than an hour methodically shooting and killing another 69 people, mainly teenagers, attending a summer camp hosted by the ruling Labour Party's youth wing.