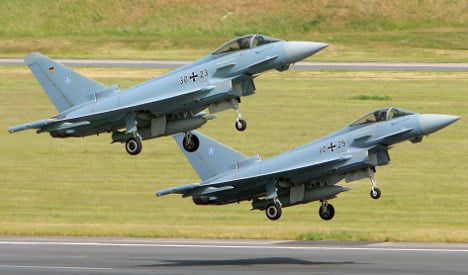 The two planes were scrambled to get the Phenom jet out of German airspace after a British company registered the plane, worth €2.7 million, as stolen on Saturday.

British firm Hangar 8 called the German police to tell them of the theft, the Kölner Express newspaper reported on Tuesday.

The risk of an illegal plane, being flown by unknown pilots with an unknown aim, over German cities, prompted terror alarms.

NATO informed the Luftwaffe, which sent two of its Eurofighters to bring the jet down safely.

“We received the alarm via NATO at 19:48. Within six minutes two of our Eurofighters started from Nörvenich,” said a Luftwaffe spokesman.

Within half an hour, the Phenom jet had landed at the Cologne-Bonn airport, where police greeted the two Austrian pilots.

The pilots, two Austrians, said they had flown from Nigeria, via Algeria and were heading for Cologne to take the plane for servicing, according to a report in the Kölnische Rundschau newspaper.

Hangar 8 has not commented on the situation, the Kölner Express said, and it will remain grounded until the plane’s ownership situation can be established.