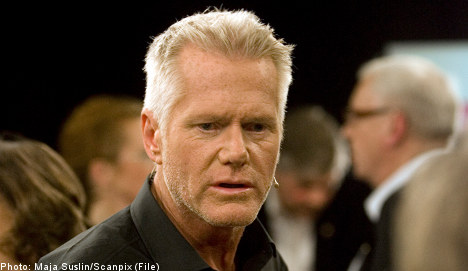 “A lot of people should be very scared about this movie — famous people, wealthy people, politicians,” Milton told The New York Post.

According to the Post, a spat with investors who accused Milton of embezzlement led to him being stripped of his CEO title last week.

“Even I myself won’t look that good…But I don’t care — it will be the truth,” he told The Post.

The film has a budget of $20 million and has been described by director Daniel Fridell as “a cross between ‘Boogie Nights’ and ‘The Godfather'”.

The younger Milton learned the ropes of the smut business from his father, and after vowing never to follow in his father’s footsteps, eventually took over operations in 1990 and moved the company’s base to Barcelona, Spain.

“It’s a sort of therapy for him. He wants to tell it how it really was. He’s very open and it’s going to feature a number of well-known people,” Fridell told Aftonbladet, adding that when he first met Milton, Jr. in 1999 he appeared to be “the most unhappy man in the world.”

The meeting, which took place in Cannes, France, came around the time that Milton, Jr. took the Private Media Group public, making it the first pornography company with a listing on New York’s Nasdaq stock exchange.

The company’s portfolio includes magazines, DVDs, websites, and licensing activities, but its fortunes have struggled in recent years in the face of an explosion of free pornography readily accessible online.

Ever the entrepreneur, Milton, Jr. made headlines in 2010 when he proposed setting up a chain of five-star hotels where guests could stay for free in exchange for having their indiscretions filmed and broadcast over the internet.

Shooting of “A Private Story” is expected to take place later this year in Barcelona, the Philippines, Canada, and Jokkmokk in northern Sweden, where Milton spent the first years of his life.

The film is expected to be released sometime in 2013.