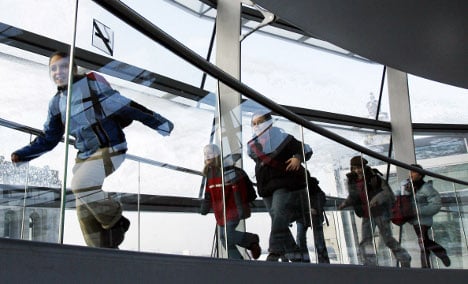 The German parliament can be a dreary business for the under-8’s age group – but not if there’s a giant track for scoot-along cars and sweets involved. At least that’s thinking of the German government.

For the two-month parliamentary summer recess, the walkway that spirals up inside the monumental glass dome of the Reichstag building in Berlin is to be converted into a special Bobby-car run as part of the temporary children’s zone.

Each party is planning to set up its own stall beneath the dome, dubbed the Kinderkuppel (Kid’s Dome), where they will be vying to win the support of the nation’s next generation of voters, the oldest of whom will be eligible to vote in the 2021 general election.

The Pirate Party is planning to hand out eye-patches, while the conservative Christian Social Union, based in Bavaria, has ordered a number of small drums and trumpets, so children can improvise their own oompah music.

Meanwhile, the centre-left Social Democratic Party is producing a cartoon colouring book explaining why the trade union movement is still relevant in modern society, and the socialist Left party said it would be designing plastic action figures of its prominent members, including Gregor Gysi and Oskar Lafontaine.

Bundestag Vice President Wolfgang Thierse will host the opening event on July 7, the first day of the parliament’s summer recess, which many of the parents among Germany’s MPs are also expected to attend.

Thierse’s two children have been accorded the honour of being the first to zoom down the spiral Bobby car run.

One of the more bizarre attractions will be puppet shows depicting recent political stories, such as President Christian Wulff’s resignation and the election of his successor Joachim Gauck, as well as the recent vote on introducing a gender quota in top German businesses.

“It will certainly be a challenge to illustrate the issues surrounding these events in a way that a six-year-old can understand, using only hand puppets,” artist Johannes Filzmops told The Local. “But I’m really pleased with the way my Merkel puppet has turned out.”

The Kinderkuppel has been organized by a special parliamentary committee. The cross-party Bundestag Kontrollgremium zum Parlamentarischenjugendlicheninterresseerweckungszweck was set up at the behest of Bundestag President Norbert Lammert to come up with solutions to two perennial problems faced by the Bundestag: first, what to do with the historic Reichstag building during the summer months, and second, how to combat apathy towards parliamentary procedure, particularly among Germany’s youngest demographic.

“It’s really been a long process, and very complicated,” committee chairman Wilhelm von Rotballon told The Local. “But studies show clearly that the political apathy is strongest among the under-eights. But it is among them that modern culture is rooted – in kindergartens and primary schools. We need to tackle the problem head on.”