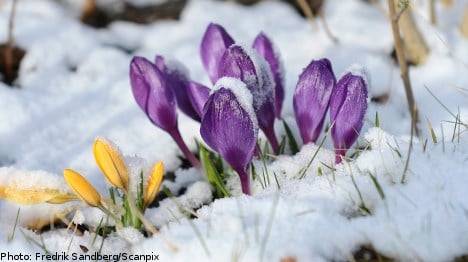 The early signs of spring took an abrupt turn on Friday with snowfalls in Stockholm and southern areas of Sweden as temperatures plunged to below zero.

The snowfalls brought an end to a week of record highs after mild winds pushed in spring weather from the west. In Uppsala the temperature on March 22nd peaked at 19 degrees Celsius, beating the previous high from 1779 by a whole degree.

The warm temperatures held even in northern areas and despite higher than average precipitation for highland areas from Jämtland and to the north.

The highest temperature recorded during March came in at a preliminary 21.6 degrees Celsius in Gendalen in Västergötland.

A low pressure front pushing in from the Norwegian Sea brought with it cool north-westerly winds and cooling temperatures across Sweden in mid-week.

The winds pushed temperatures down to -26 degrees Celsius in Karesuando in the far north of Sweden – a three week low.

While the cool temperatures held their grip through to the end of the month, SMHI’s preliminary figures indicate that the month was the warmest on record in central Sweden and the third warmest ever recorded.

As for the beginning of April, SMHI forecasts that “typical” weather is on offer to bring in the new month, with clear skies and cool temperatures. Temperatures are expected to drop on Monday with snowfalls expected from Svealand to the north.

Windy weather is in store for Easter with snowfalls in the northern areas, and moving across the country as the weekend progresses.