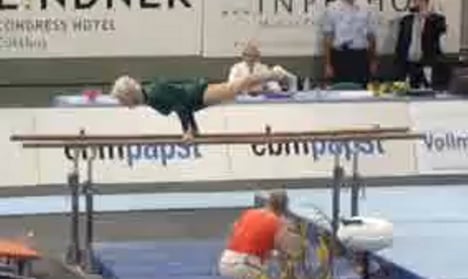 Spectators at last Sunday’s closing event gave the octogenarian a standing ovation after she performed a full planche at the bars, which required her to hold her body flat supported only by her arms.

In the floor routine she performed a cartwheel, backward roll, handstand forward roll and a headstand.

A YouTube video of her routine has since gone viral, with over 734,000 views in less than a week.

Quaas, from Halle in the German state of Saxony Anhalt, has been a hobby gymnast since childhood. It was only when she turned 30, after having won the East German Handball championships, that she turned her attention to gymnastics.

The German Athletics Association (DLV) classifies gymnasts as “senior” once they pass the age of 35. Quaas has won eleven medals in the German Senior Championships and now has hardly any competition in her own age group of 85-90.

Now she just performs for fun. “I want to give the others a chance,” Quaas told German radio station MDR earlier this month. “Competing against 70-year-olds isn’t much fun after a while,” she added.