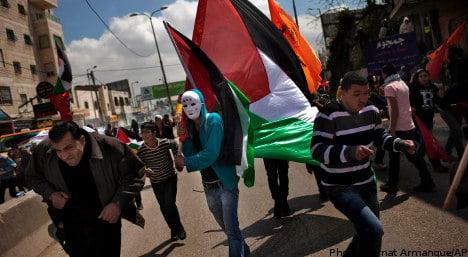 The man remains suspected of having assaulted an Israeli police officer.

“I have been conditionally released and will be interrogated again on April 4th,” the man said to the Dagens Nyheter daily.

The Swedish foreign ministry in Stockholm has been informed about the Schulz’s case.

“We can confirm that we are aware that it is a case where a Swedish man in his twenties was arrested in connection with demonstrations yesterday (Friday) afternoon,” said spokesperson Teo Zetterman.

The foreign ministry has been in contact with the 20-year-old’s relatives who have confirmed that he is no longer in custody.

“We will have to follow this and see what happens,” Zetterman said.

Philip Schulz was one of four Swedes acting within a larger group of foreign observers at a Palestinian rally entitled “March to Jerusalem”, protesting against the acquisition of land by Israel in the West Bank.

When the demonstrators moved towards a road block they were met with rubber bullets and tear-gas by Israeli soldiers, according to a report by the AFP news agency.

The demonstrators then dispersed and fled into nearby streets, but later formed a human chain and re-grouped. The soldiers then proceeded to detain a number of people in the chain, according to the local Östran daily.

Israeli law allows for the authorities to detain suspects for up to 24 hours.

Foreign observers regularly participate in Palestinian protests and are considered by protesters to offer some safety.

Demonstrations are reported to have taken place at several locations across the West Bank on Friday and according to Reuters at least one person has been shot dead by Israeli forces, with a further 220 reported injuries.