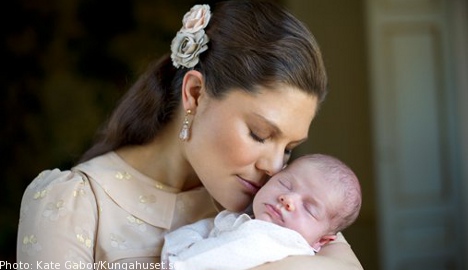 “I think these pictures were much longed for. They speak for themselves, really,” said photographer Kate Gabor to daily Expressen.

The images, depicting the new parents and their baby were shot at Haga palace in Stockholm, home of the Crown Princess couple, when the baby princess was only a few weeks old.

“Estelle was only three weeks old when the pictures were taken,” confirmed Annika Sönnerberg, acting head of information at the Royal Court, to daily Aftonbladet.

One shows both Victoria and Daniel together with Estelle, another of Victoria on her own with her baby daughter and the third of the proud father and his baby girl.

Gabor was contacted by the court and asked if she would take their picture.

“I can’t really say anything about it but I was given this very exciting assignment and I am very proud and very happy, “she said to daily Expressen.

Since baby Estelle was born on February 23rd there hasn’t been many pictures of the new family together.

One picture was published of the couple on the way home to the hospital, one from a walk the new parents took with the baby outside Haga Palace, but nothing more.

The three images released by the Royal Court on Monday are the first official pictures of the new little family.