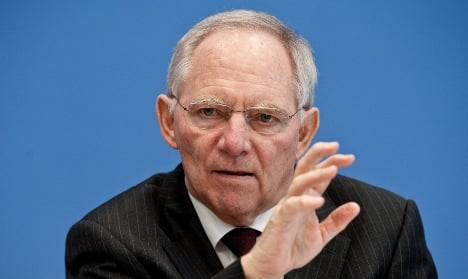 Initially, Berlin had been pencilling in a deficit – the shortfall between revenues and expenditure – of €26 billion ($34.5 billion) for the current year.

But the amended figure, adopted by the cabinet on Wednesday, will now be a much wider €34.8 billion after European leaders decided to get the eurozone’s permanent bailout fund up and running a year sooner than planned.

That means Germany will pay €8.7 billion into the fund, known as the European Stability Mechanism or ESM, this year and bring its overall contribution in cash – stretched over multiple instalments – to €22 billion.

Finance Minister Wolfgang Schäuble said the bigger-than-expected deficit in 2012 was an “anomaly” and, in a press conference, stressed Germany was committed to a policy of budgetary consolidation that was “favourable to growth”.

He also rejected growing criticism that a new German-inspired pact on fiscal rigour that 25 of the 27 EU nations have signed up to, fails to place enough emphasis on growth and jobs.

Those who just argue for the need to encourage growth at the expense of budgetary rigour had “forgotten the lessons of the (2008/09) crisis”, the minister said.

Germany will conform to the debt limit, written into its constitution in 2009, by 2014, or two years earlier than planned, Schäuble said.

The ‘golden rule’ imposes a limit on the structural federal deficit – the deficit after exceptional payments – of 0.35 percent of gross domestic product.

The cabinet also approved a preliminary draft budget for 2013, in which the federal deficit is projected to narrow to €19.6 billion next year and gradually be brought down to zero by 2016.

The budget or federal deficit is part of the overall public deficit which also includes the accounts of the regional states, the municipal authorities and the social security funds.