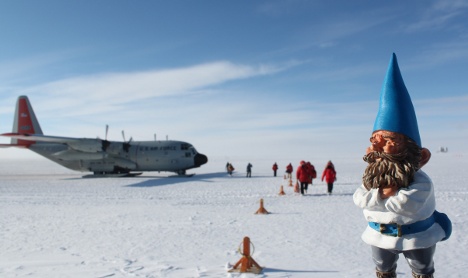 Kern, the gnome, is named after the company paying his travel bills – a scales manufacturer in Baden-Württemberg. He was first sent off last October and has already been to the South Pole, Australia and Japan, as well as stop-offs in Africa and South America.

Photos of the plastic gnome at these exotic spots have been posted on Kern’s blog, The Gnome Experiment, alongside the results of his weigh-ins. The various weights show the different pull gravity exerts, depending on where Kern the gnome is weighed.

“I did not know before how much our planet was shaped like a potato, and it has been interesting to see in practice how gravity varies depending how far above sea level you are, or whether you are close or far away from the Equator,” Albert Sauter, manager of Kern & Sons, a scales producer based in Balingen, Baden-Württemberg, told The Local.

Those involved in the experiment receive gnome Kern, together with a set of Kern scales, in the post. Various friends of the company – and even people who have applied on the website to take part in the experiment – have received the package.

The greater the force of gravity, the more things weigh, but Sauter said the differences were so slight that they could only be shown in such an experiment. Kern the gnome weighed 309.82 grams at the South Pole, but only 307.56 in Mumbai, India for example.

“We have a friend of a friend who works at the laboratory at the South Pole which is how we managed to send him there. At the moment he is on his way back to Europe from New Caledonia, and his next stop is the Cern European nuclear research facility in Switzerland.

“After that he is heading for Canada where he will go down the deepest mine in the world, around 2,000 metres below sea level.”

Sauter admitted the science was not new – but said the marketing ploy, the idea of a friend in public relations, was not only raising his company’s profile, but also spreading interest in matters of gravity.