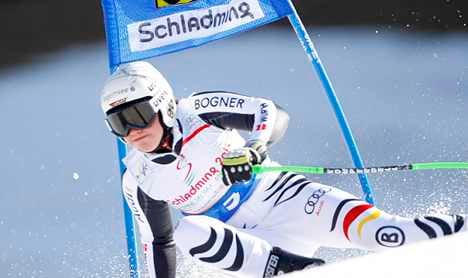 But according to a long feature in the Frankfurter Allgemeine Zeitung, the US skier Lindsey Vonn will be touch to catch. Vonn is skiing the season of her life and is taking the future into her own hands after separating from her husband and coach Thomas Vonn last year, the paper wrote.

The newspaper quoted trainers and coaches of Vonn’s saying the US skier is completely obsessed with winning and is constantly thinking of her next competition.

“That’s what makes her so strong,” Alex Hödlmoser, the chief US women’s ski trainer told the newspaper. Hödlmoser is a former ski racer and trainer of the Austrian team.

The German, who has a 95-point lead on Vonn, her closest competitor, topped the first leg in 1min 15.29sec.

Currently standing at 1,980 points, Vonn needs to finish at least 13th after the second leg to top the Austrian’s record.

On Saturday, Vonn – who has taken the overall, super-G, downhill and super-combined World Cup trophies this year – broke the women’s record of 1,970 points in one season established by retired Croatia’s Janica Kostelic.