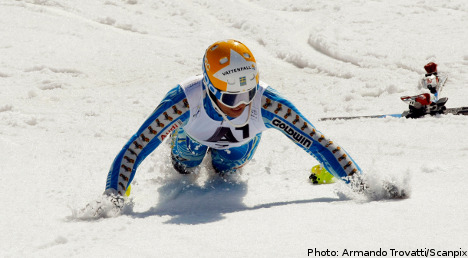 The 29-year-old was only third in the slalom standings going into the race but a fall by leader Ivica Kostelic of Croatia, and a straddled gate by second-placed Marcel Hirscher of Austria left the door wide open for the Swede to take the trophy.

Myhrer secured what was only the fourth victory of his career with a combined two-leg time of 1min 32.47sec. Neureuther and Matt trailed him by 0.30 and 0.60 seconds respectively.

“I’m so happy. I fought so long for this, it’s incredible,” said the Swede, who won Olympic slalom bronze at the 2010 winter Games in Vancouver.

Before the race, he was 66 points behind leader Kostelic and 50 points behind overall World Cup winner Hirscher for the trophy, meaning he needed at least a second place to beat the Croatian.

Myhrer’s opportunity knocked when Kostelic fell early in the first run, a setback that left the Croatian going into the second run trailing Myhrer by almost 18.5sec.

“It was a small chance but it was a chance,” said Myhrer, the winner in Kranjska Gora, Slovenia last week.

Seven skiers went out during the first leg, and third-placed Matt said: “It was hard to race but the result is good.

“It’s always nice to do a big race… and it was really motivating with this public. I’m happy with third place.”

It capped a frustrating season for the 32-year-old, who had looked on course to defend his overall title from last year until a crash then subsequent knee surgery in February compromised his bid.

Kostelic only returned to competition last week in Kranjska Gora, by which time he had dropped to third overall nearly 200 points behind Swiss Beat Feuz.

“I wanted to really attack today and it was a little too much,” the Croatian said after the first leg. “My body’s not in such good shape, so even when I risk everything I’m not as quick.”

Hirscher, who won the grand slalom title and secured the overall World Cup title Saturday after his closest rival Feuz announced he was pulling out of Sunday’s slalom, was not too disappointed at missing out on a third trophy.

“It was certainly not easy. Some pressure was already off,” he said after the first leg Sunday.

“My shoulders are about 50 kilogrammes lighter!”