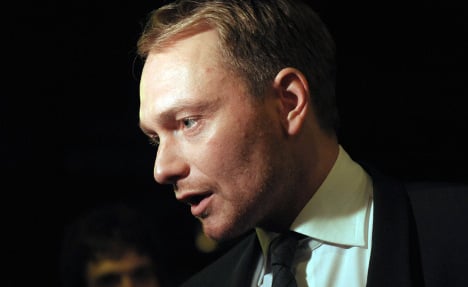 The business-friendly FDP settled the question of who should lead the campaign to avoid decimation in North Rhine-Westphalia on Friday by giving the job to former party General Secretary Christian Lindner.

This shielded Health Minister Daniel Bahr from the task of trying to pull the party’s vote from its current local polling depths of around two percent, well short of the five percent needed to send representatives to the state parliament.

The party’s failure in NRW would be considered a very bad omen for next year’s federal election. National opinion polls have also recently put the party’s approval rating at around two percent. If the numbers are anything to go by, the FDP is likely to be kicked out of the ruling coalition, forcing Chancellor Merkel to seek another partner in order to stay in power.

Attention has therefore been on North Rhine-Westphalia, where the election set for May 13 was triggered when the minority coalition government, made up of the centre-left Social Democratic Party and the Greens, failed to push through a budget.

“We have shown that we want to end the policy of everything being on tap,” Lindner told the Bild newspaper on Saturday. He said the focus would be on reducing public debt in North Rhine-Westphalia.

“We will lead a very serious election campaign,” he added.

Lindner, 33, is one of the FDP’s three young leaders which party loyalists hoped last year could revitalise it. But he, Bahr and party leader and Economics Minister Philipp Rösler have so far failed to pull the party out of the doldrums.