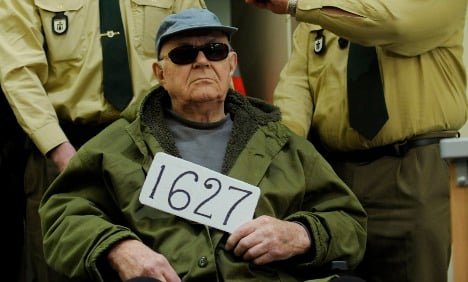 The Ukrainian-born Demjanjuk was convicted last May of helping to herd some 28,000 men, women and children into the gas chambers at the notorious Sobibor death camp in what was billed as one of Germany’s last major war crimes trials.

Demjanjuk was sentenced to five years in prison but was immediately released pending appeal and moved into an old people’s home in the sleepy Bavarian town of Bad Feilnbach.

Demjanjuk, who was stateless, was barred from leaving Germany and judge Ralph Alt said upon his conviction that he would “live out the rest of his life away from his family” in the United States.

The Munich trial was not the first for the burly Demjanjuk who emigrated to the United States after the war.

In 1986, he stood trial in Jerusalem accused of being “Ivan the Terrible,” an infamous Ukrainian guard at another death camp, Treblinka. Even in Treblinka, where beatings, gassing and torture were part of the daily routine, “Ivan the Terrible” is said to have stood out for his perverse sadism.

After a lengthy trial, Demjanjuk was found guilty of all charges and sentenced to death in 1988, only to be freed five years later when evidence surfaced proving Israel had got the wrong man.

Demjanjuk flew back to his home in Seven Hills, a suburb of Cleveland, Ohio, in business class, hoping to put his past behind him.

But prosecutors were not finished with him. After evidence emerged that he served as a guard at other Nazi camps, he was stripped of his US citizenship in 2002 for lying about his war record on immigration forms.

After years of legal wrangling, he was deported from the US to Germany in 2009 to face a new trial.

Demjanjuk has always denied working at any death camp. He said he was captured by the Germans in 1942 while serving with the Red Army, then shunted around several POW camps until the war ended.

He then worked for various refugee organisations before moving to Ohio.

During the war millions of Soviet prisoners of war died in captivity, either murdered by the Germans or from cold and hunger.

But Demjanjuk was offered a way out when he was recruited to work as a guard, the court decided. He was trained at the special SS Trawniki training camp in occupied southeastern Poland before being moved to Sobibor, now on the Polish-Ukrainian border.

Between 3,000 and 5,000 men are believed to have been trained at Trawniki from September 1941 to its closure two years later, according to Stefan Kühl, a professor of military sociology at the University of Bielefeld in Germany.

Most were Ukrainians, from the Baltic states, Poles or so-called Volga Germans, ethnic Germans who had been living in Russia for centuries.

They were known as “Trawnikis,” “Hiwis” (shorthand for “Hilfswilliger” or “someone willing to help”), or “Askaris” (the name given to black troops serving with the German imperial army in southwestern Africa in the early 1900s).

Asked during his Jerusalem trial whether he had ever killed anyone in his life, Demjanjuk cried plaintively, “Never. I cannot even kill a chicken. My wife invariably did it.”

He lived a quiet and unassuming life for years in the US, working as a Ford car mechanic, going to church and bringing up his three children with wife Vera.

Der Spiegel magazine spoke to a neighbour of the Demjanjuks who said the accused Nazi henchman’s main preoccupation was the vegetable garden that he lovingly tended.

“My dad is a survivor of the genocide famine in Ukraine, of the war fighting the Nazis, of the Nazi POW camps where millions were murdered by a torturous starvation, of the wrongful death sentence in Israel and now of Germany’s attempt to finish the job left unfinished by Hitler’s real henchmen,” said his son, also called John.

Because of ill health the accused attended his German trial either in a wheelchair or lying on a bed, wearing dark glasses and a baseball cap.

During the proceedings in Jerusalem, he occasionally infuriated spectators by blowing kisses, performing stretching exercises and once shouting at a witness.

But he barely spoke during the later legal battle.