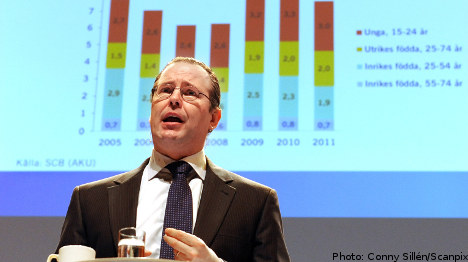 Speaking at the Moderate Party congress in Örebro, Borg criticised his own policies and called for improvements to both professional introduction programmes and vocational training.

“Professional introduction programmes must be made to work significantly better than they have in the past,” said Borg, outlining deficiencies that contribute to the difficulties of the young and foreign-born to gain a foothold in the labour market.

Vocational training in high schools is not working as it should, Borg conceded, explaining that there is too little work experience and that available opportunities were often inadequate.

“We have managed to get apprenticeship courses going, but their expansion is much slower than we anticipated,” he said, noting that youth unemployment has been far too high in Sweden for the past 20 years.

Borg expressed hope that labour market actors, such as the unions and employers, will help to push down unemployment among young people and others who are currently without work.

If these groups prove able to negotiate agreements in which young people are offered jobs and training, or apprenticeships on a larger scale, the government would be prepared to help, he stated.

This assistance could come in the form of temporary reductions in payroll taxes, he said. The government’s enquiry into apprentice contracts is due for completion in the autumn.

While Anders Borg ruled out a broad cut in payroll taxes, he underlined that cutting barriers to the labour market were at the top of the government’s agenda.

“I don’t think that general cuts have any major effect,” Borg said.

Borg however maintained that broad cuts in payroll taxes for young people, introduced by the government in 2007 and 2009, had had some positive effect.

An evaluation of the reforms has however not yet been completed.

“If we had not lowered the cost more young people would have lost their jobs,” Borg said, pointing out that instead of declining by 300,000, the number of those employed in the labour market increased by 50,000 between 2009 and 2011.

A further evaluation of a proposal to introduce a more gradual phasing out of benefits for those securing a job will be completed during 2012.

Borg said that he would consider the plan to incorporate certain requirements, such as knowledge of Swedish. He also called for a reform in the teaching of Swedish for immigrants (SFI).

While conceding that the government’s attempts to tackle the problems of unemployment, Borg dismissed the solutions proposed by the opposition Social Democrats and their new leader Stefan Löfven.

“It is only the Moderates and the Alliance government who can do something about Sweden’s most critical social problem, youth unemployment,” Borg said.