“I think that it is important for anyone who has been involved in the issue that the legal community has taken a stand and that we receive confirmation that the convention’s support for human rights apply in practice,” said Kerstin Burman, lawyer at the rights organization Diskrimineringsbyrån, in a statement.

The verdict follows the appeal from a Swede opposing the demand for sterilization from the Swedish National Board of Health and Welfare (Socialstyrelsen) in order to legally change sex from female to male.

According to political journal Riksdag & Departement, the court ruled that mandatory sterilization is a forced physical procedure and goes against the right to privacy in the European Convention.

“This is positive for our client. I am very happy. Now it will be interesting to see how the National Board of Health and Welfare will act,” said Burman to the paper.

In the proposal for new legislation, to be presented by the government this spring, the conditions that sex change candidates are unmarried and Swedish citizens would be dropped, according to TT. But not the sterilization condition.

The matter has sparked a heated debate both in the Riksdag and among the parties of the centre-right Alliance government, with the Moderates and The Liberals (Folkpartiet) arguing the clause was obsolete.

Against them stood the Christian Democrats, but after some deliberation the party fell into line with their coalition partners.

The court now ruled in favour of the claimant, saying that his sex will be considered male, despite not agreeing to sterilization.

”I can hardly believe it is true. It is a great victory in a question that will have an impact on a great number of people,” said the man in a statement. 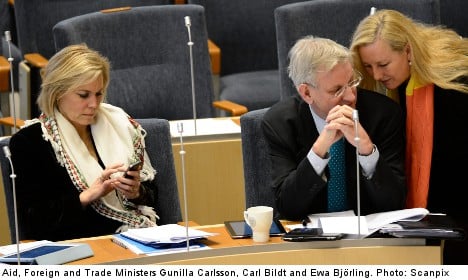 “Ferry lines, transport corridors and fibre optic cables are linking the old Hanseatic network back together, ushering in a new age of prosperity,” Carl Bildt said in his Wednesday address to the Swedish parliament.

He underlined increased military cooperation with Sweden’s Nordic neighbours, both at home and in joint operations abroad such as Afghanistan.

Sweden and Finland will help Norway to police Icelandic airspace by 2014, he said.

Bildt also prioritized the EU in his speech, calling it a “force for peace” and warning that individual member states’ woes should not distract from that analysis.

He welcomed would-be union members but briefly outlined their challenges, including organized crime in Montenegro and the challenges of political cohesion in Bosnia & Herzegovina and also Albania.

Moldova, meanwhile, was making progress, Bildt said, while Ukraine was “at a standstill” and Belarus was choosing “to isolate itself”.

He expressed more hope about progress in Turkey.

“We welcome Turkey’s ongoing modernization as a step towards full membership. We hope that a new constitution will ensure full rights and freedoms for everyone,” Bildt said.

“We welcome the additional steps that have been taken to improve the rights of Kurds.”

Bildt then turned to the Arab Spring, saying developments in the Middle East two years after pro-democracy uprisings began were today “dominated by challenges and tragedies”.

The EU, he underscored, was working with Tunisia, Jordan and Egypt on reform, but said “we have demands, in particular for women’s and minorities’ rights”.

He also took a critical stance on Israeli settlements and said “excessive violence” towards Palestinians had to end, before urging both parts of the conflict to work together to find a resolution.

“This vicious circle must be broken before it destroys the potential for a two-state solution and leads the region into new devastating wars,” he said.

As Bildt wrapped up his speech, foreign policy spokespersons for the other parties in parliament were welcomed to address the Riksdag.

He also urged Sweden to recognize a Palestinian state.

Bodil Ceballos of the Green Party took over the debate from there, arguing that Sweden needed to be a leader in climate and environment issues, despite Bildt’s assertion minutes earlier that Sweden had ambitious environmental targets.

The Sweden Democrats spokeswoman instead took aim at Bildt’s EU optimism. Julia Kronlid said Sweden had fallen into an “EU-friendly slumber” and argued that Swedes should be awarded the chance to express their views on EU membership in the way Britons will be able to do following Prime Minister David Cameron’s promise of a referendum.

Once Bildt was given a chance to respond, he took a jab at the Sweden Democrats, saying they wanted “to keep the world out of Sweden and Sweden out of the world”.

The Left Party’s Hans Linde criticized the government’s foreign policy for helping the powerful at the expense of the powerless. He accused the government of investing in firms that contribute to poverty.

The Liberal Party (Folkpartiet), a key ally and coalition partner of Bildt’s Moderate Party, took aim at the what he called the unclear content of the opposition’s would-be foreign policy.

“Nice on the outside, but you never know what’s inside,” said Malm.

Malm continued that Swedes need to understand that issue of refugees constitute a permanent, rather than temporary, issue.

He also echoed party leader Jan Björklund’s comments earlier in the week by calling for an increase in defence spending, and also said it was time for Sweden to join Nato, a long-standing Liberal Party desire.