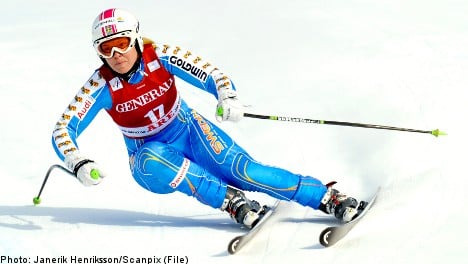 She said this week’s World Cup competition in Schladming, Austria, would be her last.

“My career has been fantastic and I’ve achieved more than I ever could have dreamed of,” Pärson said in a statement published Monday on her official website.

In 2006, she captured a gold and two bronze medals at the Winter Olympics in Turin. She had previously won a silver and bronze at the 2002 Olympics in Salt Lake City.

Pärson’s final Olympic medal came in 2010 in Vancouver, where she managed a bronze medal in the combined event after recovering from a horrific crash that many feared might end her career.

Pärson cited a number of injuries in recent years in explaining her decision to call it quits.

“The spectacular crashes and extended problems with injuries in recent years have reduced my ability to perform at a top level,” she said.

I’ve reached a point in my life where both my body and mind are saying ‘no’.”

The decision comes following a disappointing finish for the 30-year-old Pärson at the weekend in a giant slalom event in Åre, in northwestern Sweden.

“This has been the hardest decision I’ve ever had to make in my life. At the same time, I’m curious and excited,” she said.

“I’ve always been a fighter and this has been a tough decision, but after reflection and a great deal of discussion with myself I feel ready for new challenges in my life.”

The Monaco-based Swede — who hails from Tärnaby, the same small northern town as skiing legend Ingemar Stenmark — said the 2010 Olympic bronze would remain one of her most cherished memories.

After a horrific crash in the downhill part of the super-combined that left her with severe bruising, Paerson decided to pursue the slalom the following day and finished with the bronze.

That feat tied her with former fierce rival Janica Kostelic of Croatia in having won six Olympic alpine skiing medals.

“The bronze medal in Whistler at the 2010 Olympics is (a great memory) on a personal level, because I conquered my mental ability. That hill was just not going to beat me!,” she said.