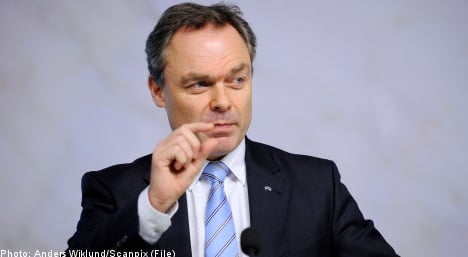 In his speech, Björklund repeated that the government has failed to combat Sweden’s youth unemployment, and called for several measures to be taken.

For one, Björklund wants to offer high school (gymnasium) dropouts a shorter vocational course to help their competitiveness on the labour market.

“It’s better that a 19-year-old gets a job, even if it’s not as well paid, than that 19-year-olds should have to go unemployed and on social welfare,” Björklund said.

He urged the many local politicians present at the congress to act as pioneers for this.

“Be the first to introduce youth wages. Give more young people the chance of a job,” Björklund said.

After his speech, he specified his idea of lower youth wages. The Liberal Party will be proposing special youth wages in a third of Sweden’s municipalities.

This special deal is suggested to give people up to 23 years of age an entry salary which is roughly 75 percent of the normal minimum wage.

On top of this, the Liberal Party is proposing shorter vocational courses for students who are about to quit high school. The idea is that students obtain a professional certificate after a year or two of these vocational courses.

“Sweden should not have any munitions cooperation with Saudi Arabia,” concluded Björklund in his opening speech.

However, he did not explain why the Liberal Party supported the 2009 government decision which authorized the Swedish Defence Research Agency (Totalförsvarets forskningsinstitut, FOI) to enter a deal with Saudi Arabia with extensive military cooperation.

“We were against the far-reaching cooperation deal made by the socialdemocratic government in 2005, and demanded in the government negotiations of 2010 that the deal not be lengthened,” said Björklund, maintaining that the Liberal Party has long demanded that Swedish arms exports legislations be tightened.

Sweden should not export weapons to dictatorships, Björklund said.

Björklund has received criticism for his reaction to the Saudi arms factory. When news of the deal broke last week, Björklund appeared unknowing of the affair, but on Saturday he confirmed that he had known about it all along.

The Greens’s spokesman Gustaf Fridolin is among his critics, according to newspaper Dagens Nyheter (DN).

“It’s striking how everyone in the past couple of days have claimed to have very little knowledge of the deal. And the longer the story rolls, the more knowledge they turn out to have had,” Fridolin said to DN.

Björklund’s speech also included a dig at the Moderate Party, warning that the governing centre-right alliance may have trouble attracting voters at the next election.

“I think it’s right that after governing for eight years there’s a significant risk that the alliance isn’t considered exciting or curious. Many governments before us have gone down that road. We liberals aren’t against tax cuts, on the contrary, but voters mustn’t perceive that our answer to all future issues is another in-work tax credit,” Björklund said.

“It’s now high time that we allow societal development to be governed more by social liberalism,” he concluded.