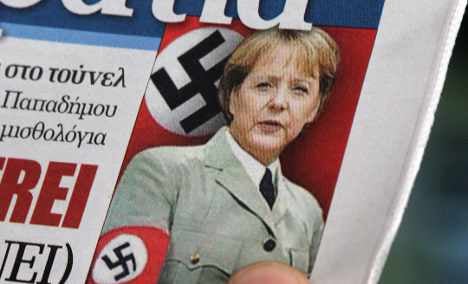 Speaking to the Bild newspaper, the new ambassador – who took up his post in Berlin on Friday – said he was deeply shocked by the photos. The pictures “trivialise” the Nazi period, said Hadas-Handelsman in an interview published Saturday.

“They’re just terrible!” said Hadas-Handlesman, referring to pictures published by the populist Greek newspaper Dimokratia of Merkel in a Nazi uniform with the subtitle Memorandum makes you free.

The headline referred to a memo for the savings program European Union negotiators had worked out with cash-strapped Greece. The makes you free was a direct reference to a sign above concentration camps that cynically declared: work makes you free.

“Pictures like that trivialize the Nazi period,” said the Israeli ambassador. “The Holocaust and National Socialism were unique. They were the worst times in the history of mankind.”

Hadas-Handlesman himself lost almost all of his family on his father’s side during the Holocaust. “Over the course of a week they were all rounded up, sent to Treblinka and murdered at once,” the ambassador said.

Present day commentators should never make comparisons to the Nazi period as this “mocks millions of victims,” added Hadas-Handlesman.