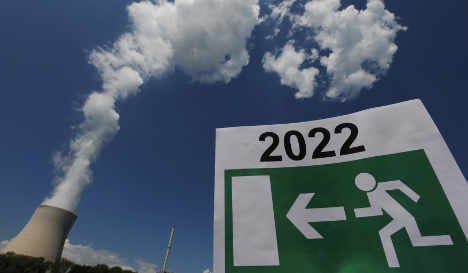 “We have seen the risks in a highly developed industrial country, risks which we considered impossible,” she said in a video interview posted on the government’s website. “It convinced me that we had to speed up the nuclear phase out.”

In March last year, Europe’s leading economy decided to immediately shut down its eight oldest nuclear reactors and to take nine others out of service by the end of 2022. In future, Germany aims to rely on renewable energy sources.

“I think that quite a large part of the (German) population is in favour of the phasing out of nuclear energy by 2022,” said Merkel on Saturday.

Demonstrations are planned across Germany to mark tomorrow’s anniversary of the disaster in Japan. Protesters will march under the slogan “A warning from Fukashima, shut down nuclear power plants now.”

The German government’s ambitious energy concept aims to raise the share of energy generated from renewable sources to 35 percent by 2020 and 80 percent by 2050.

The electric grid must be extended quickly if these targets are to be met, added Merkel. A plan for network extension will be announced at the beginning of June.

This isn’t fast enough for some critics, who say Merkel’s coalition is dragging its feet.

“The government has unfortunately put the nuclear phase out on the back burner,” said Hubert Weiger, head of Friends of the Earth Germany (BUND). “This is irresponsible considering the risks of nuclear power and the unsolved problem of nuclear waste,” he added.

Merkel sees great opportunities for German businesses on the world market in the switch over to renewable energy.

“We have a good chance of becoming leaders in other markets, for example in the market of renewable energy sources, and that could work out very well for us in the future,” she said.

Japan is gearing up to mark the first anniversary on Sunday of the huge earthquake and tsunami that devastated its northeast coast. More than 19,000 people were left dead or missing and the catastrophe sparked a meltdown at the Fukushima nuclear power plant – the world’s worst atomic disaster since Chernobyl in Ukraine in 1986.