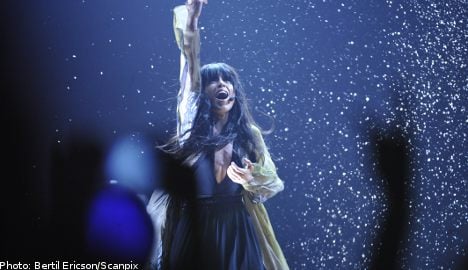 The circus started six weeks ago, with the first of several semi–finals, but on Saturday night the very last leg in the competition was held in the Ericsson Globe (Globen) theatre in Stockholm.

As is the case every year, the weekly competitions have been watched by millions of Swedes every Saturday.

The acts have been the talk of many a lunch room and school yard, and many exciting scandals have taken place throughout February, from bad-boy actor Torsten Flinck groping presenter Gina Dirawi, to a number of newspaper headlines about author Björn Ranelid’s song about the miracle of love, as well as about his unusually orange skin-tone.

On Saturday night, the many hopeful acts had at last been whittled down to a final ten, performing in a Globe theatre filled to the brim.

In unison, they shouted “Globen, are you ready?”

And the crowd went wild.

Loreen’s song “Euphoria” was ranked as a major favourite by betting companies before the show.

The best stage show may have been tonight’s runner-up, Danny Saucedo, performing “Amazing” with glowing stage clothes, lit up by some reported 500 batteries.

However, it will be Loreen who represents Sweden in Europe in the Eurovision Song Contest, to be held the last weekend in May in Baku, Azerbaijan.