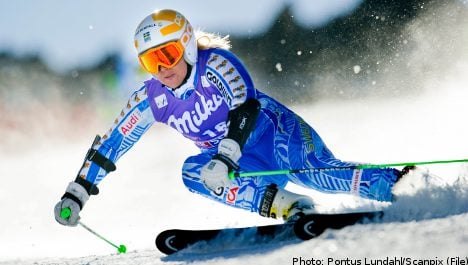 “I’m sorry to say it, but that was the worst surface of the year. There were such craters, I was shocked when racing there,” said Pärson to newspaper Aftonbladet after the race.

When Lindsey Vonn commented on Pärson’s poor performance, she had a surprising response to what she would’ve done in Pärson’s situation:

“I probably would’ve quit a long time ago. I want to quit on top,” said Vonn to Aftonbladet.

However, she still believes that Pärson may yet return to world class form.

“Anja is a winner, who’s won a lot. I think she still wants to, and can, win. When you’ve won as much as her, you can definitely do it again,” Vonn said.

“From what I’ve seen, she’s very happy and enjoys skiing, and that’s what matters most. Sometimes you don’t have to be fast to enjoy what you do.”

Pärson has previously announced her decision to quit skiing, but changed her mind and decided to continue for the 2012 season.

SKIING
UPDATE: Where in Europe will it be possible to go skiing this year?
Url copied to clipboard!