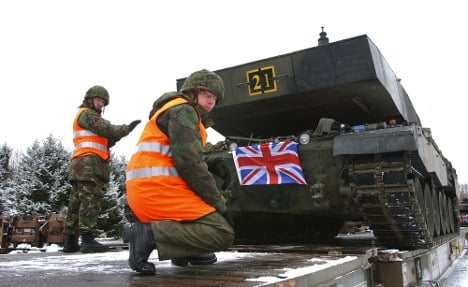 According to reports in The Guardian, The Telegraph and Die Welt newspapers, the British Ministry of Defence (MoD) may re-locate thousands of military tanks, carriers and cars in the Rhineland as it sells a huge complex in Ashchurch, Gloucestershire, where 6,000 vehicles are stored and repaired.

Despite the Guardian’s claim that the MoD’s logistics planners have already “plumped for” the Ayrshire Barracks near Mönchengladbach as an ideal spot, Mike Whitehurst of the British Forces Germany denies that any final decision has been taken.

“I wouldn’t be led too much by media speculation,” Whitehurst told the Local. “As with all these things, there is some serious decision-making going on about the use of military estate. The vehicle depot in the UK may or may not be sold, but there are quite a lot of vehicle depots in the UK, and it is likely that the vehicles could be distributed elsewhere.”

What makes the plan all the odder is that the British military has already declared that it will vacate Germany, though the Ayrshire Barracks will be retained as a vehicle depot. Currently, around 300 people work at the logistics site in the Rhineland.

Critics have expressed concern that the move could leave the UK short in an emergency. Plus, the MOD is yet to calculate the considerable cost of shipping fleets of tanks across Europe.

“It is just media speculation at the moment,” insisted Whitehurst. “I mean, ask yourself logically what would be the purpose?”