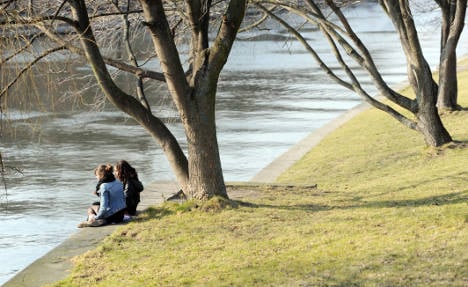 Rain – and snow in higher parts – will fall over large parts of Germany throughout the night on Wednesday. Up to 10cm of new snow will cover the ground in the foothills of the Alps and in Germany’s mountainous central states.

The snow may even reach lower southern states and the country’s eastern border, where temperatures could drop as low as minus three degrees Celsius.

In the west, however, temperatures will rest at around three degrees for most of the night.

By Thursday, rain will be falling mostly in the east of the country, with the northwest enjoying comparatively balmy temperatures of nine degrees Celsius.

High areas may still be faced with snow though, “with up to 15cm of fresh powder possible in the Alpine region,” according to DWD meterologist Thomas Ruppert, who added that temperatures would stay around three degrees in lower areas.

During Thursday night clouds are expected to gather across northern Germany, and yet more snow could fall in the Alps and central Harz mountains.

Temperatures will barely climb above freezing in many areas, and could reach as low as -4 degrees Celsius in the south east, where a light frost may greet early risers the next morning, Ruppert warned.

On Friday, residual snowfall will linger over the Alps and rain will continue to dampen large areas of northern states. The rest of the country should remain dry, with highs of 11 degrees in low areas and six degrees in higher areas.

Rain will spread across most of the country during Friday night, leaving just a few dry patches in the south.

Thick clouds will stop Saturday from being a sunny spring day, but highs of 13 degrees should be expected everywhere except for along the Baltic coast where it will be no warmer than five degrees.