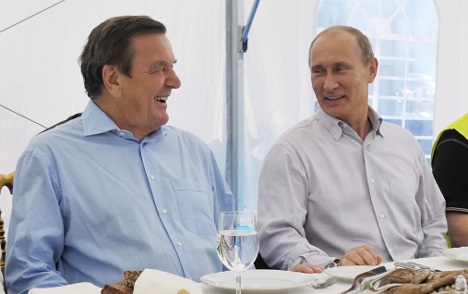 “I think he is seriously trying to direct his country towards real democracy,” Schröder said of Putin in an interview with German state radio Deutschlandfunk on Wednesday. “No-one knows better than him that there is still a lot to be done.”

The Organization for Security and Co-operation in Europe (OSCE), which sent observers to the Russian presidential election on Sunday, has accused the Kremlin of systematic election fraud.

“There were serious problems from the very start of this election. The point of elections is that the outcome should be uncertain,” Tonino Picula, co-ordinator of the short-term OSCE observer mission, said in a statement.

“This was not the case in Russia. There was no real competition and abuse of government resources ensured that the ultimate winner of the election was never in doubt.”

Activists have also alleged there was evidence of widespread ballot box stuffing and other forms of election manipulation, but Schröder remained unimpressed.

“I have no personal information about these elections,” Schröder said. “But when I see one or two professional election observers from Germany talk about it, I’m not so sure whether their pre-judgements are not bigger than their judgements.”

“That’s why I don’t want to take part in this discussion, for good reasons,” he added. “But I think it’s notable that the elected president has made clear that any accusation that can be substantiated will be investigated.”

After he left office in 2005, Schröder became board chairman at German-Russian operating company Nord Stream, which operates a natural gas pipeline under the Baltic Sea from Russia to Germany.

Gazprom, a Russian company in which the Russian government holds a controlling stake, is Nord Stream’s majority shareholder.