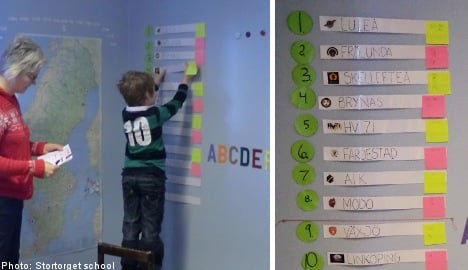 “The Elitserien has endless lessons to teach children about respect,” teacher Helén Renberg told The Local.

Renberg is one of the teachers at the Stortorget preschool in Arvidsjaur, which has been testing a novel approach to learning this term.

“It all started after Christmas. We found that both boys and girls were really interested in hockey. They were asking about the results, which teams were playing, et cetera,” she said.

Renberg and her colleagues decided to harness the enthusiasm of the kids, aged one-to five-years-old, and come up with a way to use the Elitserien as a teaching tool.

“The primary goal of our school is teaching respect. And hockey provides a number of ways to teach respect, from the way players shake hands with each other, to how they thank a referee after the game,” said Renberg.

“We’ve got rules that encourage the kids to be positive and proud about the teams they support but refrain from saying bad things about other teams, no matter who wins.”

While some parents were sceptical at first, the optional theme proved wildly popular with the kids.

Teachers discovered the children were receptive to learning lessons in maths, geography, colours, and shapes in a whole new way when the teaching method involved Sweden’s top professional hockey clubs.

“We have a big map of Sweden with pins for where all the teams are based. When we talk about upcoming matches the kids ask about how far the teams need to travel and how they will get there. They start to see what a long country Sweden is,” said Renberg.

Hockey is even helping the Swedish pre-schoolers learn about music, as via a CD which has the theme songs of all 16 teams, as well as the Swedish national anthem.

The day after each match, the kids get to hone their math skills by tallying up the points awarded to the winning teams and then update a replica of the league’s leaders’ table hanging on the classroom wall.

And the youngsters get to learn more about shapes and colours by studying the emblems and jerseys of the Elitserien teams.

“But soon we’re going to have to change everything because the playoffs are coming up,” said Renberg.

And if reports from parents are any guide, it appears as if the Stortorget school has scored with its hockey-based curriculum.

“The parents see a difference in how their kids behave,” Renberg said.

“Now they’re really into it too and have been coming forward with their own suggestions.”

Renberg dismissed concerns that a violent sport such as ice hockey is a wrongheaded approach to teaching children about respect.

“(If the kids ask about a hockey fight) that simply becomes another teachable moment,” she said.

Renberg and her colleagues recently shared their success with teachers at other area schools, but explained there’s no guarantee the project will continue next year.

“It all depends on what the kids are interested in,” she said.

For the time being, however, the youngsters are focusing on the upcoming playoffs.

“I’d say the group is equally divided between Skellefteå and Luleå,” said Renberg.