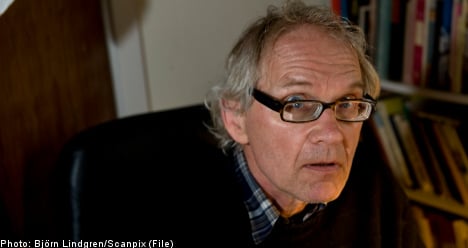 Just as a circle has no end, the same fate seems to have hit the national scourge which is the roundabout dog. It keeps coming back as if it was today’s news.

Recently, another intermezzo occurred at Karlstad University where my lecture was interrupted by a loud group of egg throwers.

The reaction kicked off when I showed one of my pictures from 2006, meant as a comment on the then on-going Danish caricature battle.

The image depicts the prophet and HC Andersen on a joint field trip to the Carlsberg brewery.

The image is impossible to publish in the conventional media but can be seen here.

The same picture was exhibited in Norway without causing a stir.

However, it was mostly a coincidence that the attack was staged in Karlstad as the instigators were just waiting for a convenient opportunity.

You might wonder who they were. In the media they were described as “a group from the audience” and all you can gather from that description is that they weren’t neo-Nazis because that group is always identified in media reports.

My speech was about freedom of expression and the development of the roundabout dog story.

It had a special connection to Karlstad as the whole journey began in the little community of Tällerud where the sketches were meant to have been exhibited in 2007.

The organizers of the recent event, which took place on February 21st, was the university’s association of international affairs (Utrikespolitiska föreningen), a version of which exists at many universities.

They invite speakers representing different sides of the public debate on a regular basis.

That I had been invited displeased the Islamic Culture Association (Islamiska kulturföreningen) and the Karlstad Young Muslims (Unga muslimer i Karlstad) who urged to a boycott of my speech with the motivation:

”Lars Vilks is a controversial individual who is abusing the freedom of expression that we all enjoy and using it to provoke in such a way that it creates tension between different societal groups. We are worried that the association of international affairs in Karlstad, in cooperation with Karlstad University, has chosen to invite him to speak about the boundaries of freedom of expression after his previous actions and provocation against Muslims through his caricature.”

For these organizations, the outer limit of freedom of expression exists at the point where symbols of the Islamic religion are called into question.

One has to admit that firing on all cylinders has proved efficient. Because the winners, at least in the short term, are the egg throwers.

It may seem like a victory that the lecture could continue after the rabble-rousers had been removed but it was a Pyrrhic victory.

Respectable institutions and representatives will dissociate themselves from those types of methods but not much more than that. And which organizations will want to arrange lectures that risk ending in an uproar and furthermore require significant security measures?

Add to this the demand from regular Muslim associations and their supporters that they be “respected” on their own terms.

The strategy is a winning one.

Images of the prophet have long been officially prohibited and the racist label hovers over those who want to debate the situation.

It is therefore rather infrequently that I have the opportunity to appear in public and explain things from my perspective. Further, this double fear (risk of riots + possible racist label) has led to a significant reduction in even my regular lecturing schedule.

During the discussion after the recent speech in Karlstad, one Muslim in the audience voiced the recurring opinion that my sketches were badly made. He ended his contribution by saying that his children could have done a better job, then got up and left.

Technique and style can’t be completely irrelevant as it is often brought up in discussion. However, I have been accommodating in this issue and can offer a large selection of styles and variations.

Admittedly, it is a question of the same image of the roundabout dog which has been adapted in different ways. These pictures are also impossible to publish in conventional media but may be seen here.

Lars Vilks is a Swedish artist.

This article was originally published in Swedish on the Newsmill opinion website. English translation by The Local.