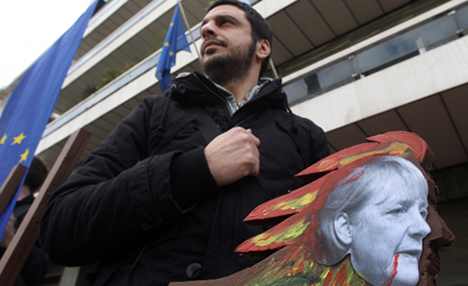 Patrick Döring, general secretary of the Free Democratic Party, junior coalition partner to Angela Merkel’s Christian Democrats, told the Bild am Sonntag newspaper that he is also annoyed at the depiction of leading German politicians in the Greek press as Nazis.

The FDP politician said opposition politicians in Greece, in particular, were bad mouthing Europe instead of acknowledging their own mistakes. Döring wants Greek President Karolos Papoulias to call for moderation instead of heating up the conflict.

“The patience of its partners, in Germany and in all of Europe, is running very thin in the meantime,” he said. “Whoever does more will be helped more.”

But Döring is against Greece withdrawing from the euro, saying that would only provoke a bigger financial crisis. But he would like the Greeks to take more responsibility for the mess and acknowledge what Germany and others are doing to help.

“It’s not too late for a word of thanks and appreciation,” he told the newspaper.