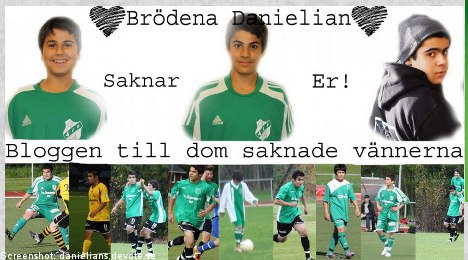 A blog in support of Valerik, David, and Haik Danielian

The family was allowed to return on Friday after Susanna Danielian was offered a job in the local Ica supermarket, making them eligible for residency under the regulations for labour market migration.

“It is 11 years since you first came to Ånge. Now you have finally received your papers to say you can stay,” Sten-Ove Danielsson, a local councillor, said in a speech to the hundreds gathered at Ånge sports field on Saturday, according to a report in the Sundsvalls Tidning daily.

“You can whistle when you meet the police on the street and no one can eject you from the country,” he added.

The chairperson of Ånge IK sports club handed over a symbolic check for 147,000 kronor ($23,000), equating to the money donated locally to assist the family in the plight.

The enthusiasm of local residents over the family’s return was captured on a blog started by friends of the boys after they had been deported.

“The feeling of meeting them again after 3 looooooong months is indescribable,” friend Samuel Österlund wrote on Saturday.

“The only thing I can say now is yeeeeeeeeeeeessssssssss.”

The Local reported in December that the residents of Ånge were outraged at the decision to deport the family of five after they had been part of the local community for over ten years.

The deportation of the family’s three teenage sons, in the early hours of Lucia Day, caused consternation among the boys’ friends at school and over a hundred residents (of around 3,000) gathered in the town square that evening to protest and to launch a campaign to reverse the decision.

The deportation however came as little surprise to the family as they had twice had applications for residency rejected and had a deportation order hanging over them since 2008.

After being deposited at the airport in Armenia the family were able to find refuge in the home of a taxi driver who took pity on them, according to a report in the Aftonbladet daily.