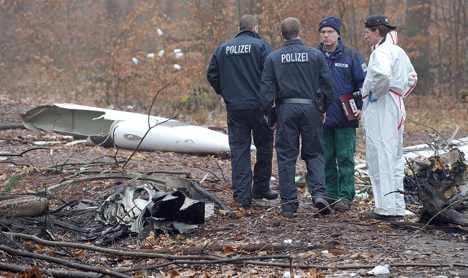 One of the victims, the plane’s pilot, was a 52-year-old German textile millionaire, who lived in London. The 53-year-old head of retail chain C&A’s Austrian operations was also killed, as was a woman, 43, from Mönchengladbach.

The other victims were an American and a 27-year-old woman from Ukraine.

Police are still baffled by the the accident. Bild reported that the pilot had radio contact with a control tower and appeared calm and concentrated.

He was flying the Cessna 750 Citation X, worth about €11 million, in a straight line with no signs of trouble.

The paper speculates that a cloud bank may have suddenly appeared and surprised the pilot.