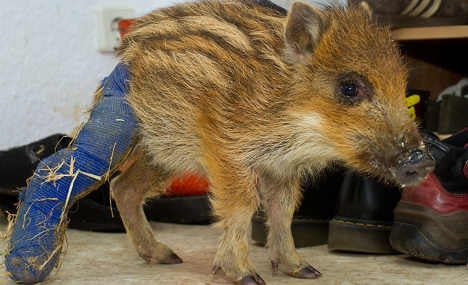 The family was on a stroll last weekend when it found the injured animal on the edge of Alt Tucheband in the Märkisch-Oderland area of eastern Germany. They took it to a veterinarian, where the boar was treated.

The boar has since been returned to the family, which is fostering the pet until Sunday, when it will be transferred to an animal sanctuary near Oranienburg in the state of Brandenburg.

The facility has a reputation of baby boar care. A French bull dog named Baby adopted a group of tiny orphaned boars after they were found freezing in the woods.

A rider turned the animals over to the sanctuary, where Baby has been watching over them ever since.