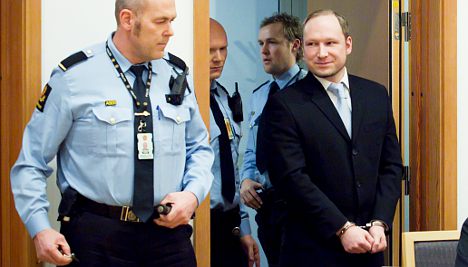 This would allow Anders Behring Breivik to be sentenced to confinement in a psychiatric ward instead of a prison at the end of his trial.

"The way the case appears at the time the charges are being brought, there is no basis to request a regular prison penalty," state prosecutor Tor-Aksel Busch wrote in instructions to the  prosecutors handling the case.

"But it must be clear in the charge sheet that the prosecution reserves the right, during the trial, to request a prison punishment or containment lasting 21 years (the maximum prison sentence for people deemed criminally responsible in Norway), based on the complete evidence shown to the court," he added.

Busch said that the way it looks now, Behring Breivik will be tried as someone considered criminally insane, while stressing however that this position could change if new information about the 33-year-old right-wing extremist's mental state emerges.

Behring Breivik is currently undergoing a second court-ordered psychiatric evaluation, after the initial one late last year found him criminally insane, sparking objections in some quarters, especially among families of his victims.

But regardless of the findings of the second expert assessment of his criminal accountability, he will go on trial starting April 16th and it will in the end be up to the judge to determine whether he can be sentenced to prison.

On July 22nd, the man who has claimed to be on a crusade against multi-culturalism and the "Muslim invasion" of Europe set off a car bomb outside government buildings in Oslo, killing eight people.

He then went to Utøya island north-west of Oslo, and, dressed as a police officer, spent more than an hour methodically shooting and killing another 69 people, mainly teens, attending a summer camp hosted by the ruling Labour Party's youth wing.

Behring Breivik is under 24-hour surveillance by psychiatrists at a prison near Oslo. The assessment by two new psychiatrists is due on April 10th, just days ahead of the start of his trial.

If they also conclude that he is criminally insane, the judges will have little choice but to order his confinement in a psychiatric ward, experts say.